Skip to content
HomeLEWIS SHAFFER – Is Free Until Famous 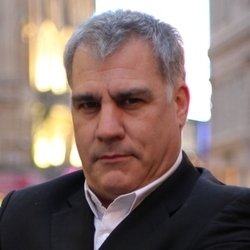 Lewis Schaffer is not a nice man. He is bitter, sleazy, arrogant, smug, self centred, lazy, misogynistic and possibly even a little bit racist. Not two minutes into the show he was coming on to my mum and telling my mum’s husband and me how terrible and old we both looked. He fished around for gags by desperately begging the audience to come up with suggestions before veering off the topic completely. For a large part of the act you kind of got the impression he was on the verge of total mental collapse. Imagine kind of a cross between Joan Rivers and Charlie Chuck and you’re not far off. Now I’m no fan of Joan Rivers but I have all the time in the world for Charlie Chuck. And it was this side of his routine, the character and madness of Lewis Schaffer that I found the most appealing. His material occasionally veered off into pure shock value and was a tad thin at times but the delivery was so toe curlingly obnoxious that he always won through on pure personality alone.

It is not an easy watch, definitely don’t take your children (he might kidnap them) and definitely don’t sit in the front row as we foolishly did but if you’re ready for it Lewis Schaffer is one of the most vital shows on the free fringe if not the fringe as a whole. Free until Famous is the name of his show and I raise up the challenge, forget the Ginge, the Minge and the Twinge, give this guy all your money and get him a prime time channel four show right this instant! If only the world were so idiotically brave…