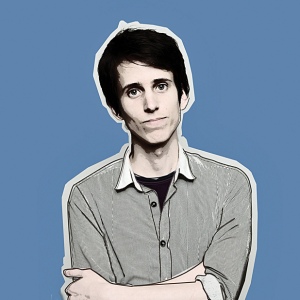 Something went wrong for Chris Stokes today. Whether it was the overwhelming whir of the fans or the wrong audience or the depression of his recent break up finally catching up with him I didn’t see the 4 star performer of the List and Skinny reviews. But the ingredients were all there. He was charismatic, charming, intelligent and some of his material was undoubtedly strong yet regardless I couldn’t help but feel he was lacking a certain spark. He was making a valid point too. A more than justified dig at all those people we know only too well (unless you are one) who are constantly telling us how it is with scant regard for human sensitivity. Basically people who try to justify their own obnoxiousness by dressing it up as some kind of heroic quest for truth. Don’t get me wrong, I was on his side. But about half way through, just as he was starting to brighten up, he just kind of gave in on the audience and resorted to reading exerts from one of said truth seekers self penned erotic novels in an Alan Bennet accent. Now this device of apparently giving up on your audience before launching into your finest material is not uncommon in contemporary, alternative stand up. But it’s usual followed by some sort of spectacular mental collapse rather than the disappointing nonchalance this show dissolved into. Where was the depressing diatribe about his recent relationship collapse I was so looking forward to? And, with this comics apparent potential for whit and grace could have been the shows highlight.

But no. Chris Stokes was having an off day. But I wouldn’t let this review put you off because I suspect when he’s on form he can bring the house down. Just have a little faith. See it as comedic Russian roulette or bag of revels. It might just be magnificent. But then again, maybe he should have just took that PR women’s advice and worn the yellow jumper after all…