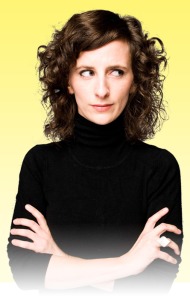 Felicity Ward has had many successes in her career to date, since first making a break on her native Australia’s comedy scene in sketch show The Ronnie Johns Half Hour in 2005, having received international critical acclaim for the run of her show The Hedgehog Dilemma.

Having heard such good things I had prepared myself for disappointment and perhaps an unpolished performance, being so early on in the festival run, but I was pleasantly surprised and impressed! Ward attacked the show with gusto, and quickly made the audience relax, with a mixture of self depreciating stories and hilarious insights into some unusual traditions in her home country Australia mixed with personal experiences about perception and perspective, the theme of her show.

She intelligently trod the line between childish humour and intelligent wit, with many points resonating with the audience judging by the empathetic laughter from the crowd. For those who think they have seen all Ward has to offer and especially those who is often hear saying there is no such thing as a funny female comedian, I highly recommend you let Felicity Ward alter your perspective, she isn’t without surprises and will leave you questioning your own perceptive ability in a charmingly bemused and sharp way. Felicity successfully proves that your first impression of the tip of the Iceberg often belies the truth beneath. FOUR STARS