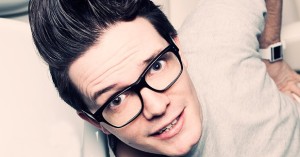 You might first get the impression that David Morgan is a baby face young guy full of reserve – then he starts talking, & this veritable chatterbox unloads his mind off onto a slightly stunned audience. A computer nerd, David couldn’t be more topical. His subject is the biggest revolution of the last few years: Social networking. From hunting for people on Facebook, through taking “selfies” at funerals, to situations commonly faced on facebook and twitter, this phenomenon of modern life has been criticized in the most funniest way.

With Mr Morgan, not only get one hour of stand up comedy, you also get a lesson in technology, & I had no idea that many online tools even existed. He is smart, talented and very positive, which all reflects throughout the show. I like the way he is organized, how he maintains a sequence of ideas &  how knows exactly what he is talking about. He also has the advantage of thinking quickly and reacting fast, though should probably talk a bit slower than 10 words per second. THREE STARS