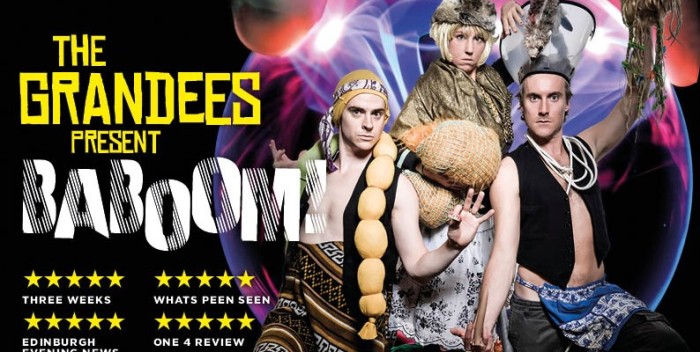 There is sketch comedy, & then there is the weird & wondrous happenings that inhabit the Grandee universe. These are Marny Godden, Tom Turner and Andrew Mudie, who say they are from London, but their imaginations are definitely on another planet. The boys are funny, but Godden in particular is a real treat to watch – with scintillating blue eyes, flashing white teeth & impeccable comedy timing,  she really does have the x-factor.

Their show consists of three twenty-minute or so plays, separated by some kind of comedy striptease from each of the boys. The first play sees Godden play a balding middle-aged adveturer called Wilmot Brown, who journeys to the center of the Earth where he fights alien invaders. The second play is a little weaker, but the third act of the hour reverts to the surreal brilliance of the first, in which we encounter the politics behind a parliament of owls.  Again, Godden’s performance as some kind of Calypso beggar-queen is completely stunning. FOUR STARS