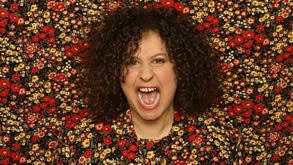 In a dark, packed out and rather sweaty loft, Juliet Meyers ran through the corridor shouting and “welcome to the stage….Juliet Meyers”. The anticipation was immediately taken up a notch and her energy continued to flow throughout. Her baggy black t-shirt with stars, galaxies and orange writing reminded me of Back to the Future and immediately made me think this woman is quirky, where will she take us? Her jokes were no different and we were constantly kept wondering how far she would push the next topic in her gag driven show about being an outsider.

What would a show about being an outsider be without jokes about religion, race, politics and feminism? Juliet uses her Jewish heritage and Iraqi Jew father to her advantage here and laughs at peoples narrow-mindedness. Relatable and original. She tackles pigeon holing and touchy subjects like the Scottish referendum with wit and good intentions. Even when she shocks you can’t help but smile and understand where she is coming from. Her chatty and expressive nature makes the audience feel at ease and fully involved. The audience are certainly not just there to watch this one, she wants to know us too.

Juliet’s observations about life and people who want to appear different or obscure are spot on. Laughs were in abundance. Her playful acting a joy to watch. Energy was certainly not lacking.  My only criticism would be her invisible child, a creation (the reason for which becomes clear) that is understandable. However, a couple of times the sudden use of the invisible child was lost on me slightly and seemingly the audience too. I am not sure she needed it. Otherwise, Juliet had a charm and jolly nature about her that made me want to go for a drink with her afterwards. A fun and entertaining way to spend an hour.

Juliet may even have the answer for how men have (apparently) become better at foreplay in the past 10 years! Let’s just say I will never look at a man and a computer the same way again. A pun that you repeat to everyone – now that’s worth seeing.