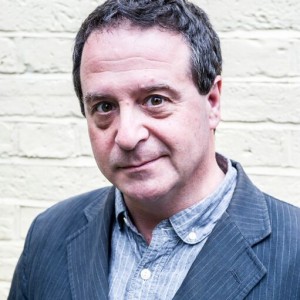 Mark Thomas makes you want to break the law, or break some law or other, some law that may have existed since nineteen canteen – such as imagining the end of the British monarchy. At the start Mark Thomas offers an apology for the show, by saying it’s a work in progress. This is definitely not the case and no apology is needed. He has done his homework. The performance is all about carefully thought out acts of defiance and dissent, which provides the material for the politicomedian.

The show is the story of three walks that Thomas took through London and the changes to the city that he’s noticed and which break his heart: bankers complaining about a garage in the street, where they have just moved to, ruining the tone of the area; corporations owning almost all the public space; fining of the homeless; 70% of new-build houses being bought by foreign investors; no loitering signs on the Thames walk way.

It’s a very minimal show with no gimmicks, just a few slides showing the routes of the walks and images of Thomas’s challenging behaviour. As ever it’s a fine mix of humour and startling facts about the powers that be. It makes you laugh and makes you angry. At various points he asks the audience to get involved, by copying some of the walks, or sending in pictures of protest banners at the new US Embassy building site – which is going to have a moat! – or joining him on various demonstrations. My favourite trespass is a 10k walk along the two public sides of the non-public triangle in front of the Royal Bank of Scotland’s headquarters in London.

At the start of the show Thomas also invokes the spirit of 60s international art collective Fluxus. He’s right to do so. His stunts that challenge ridiculous laws are political art of the highest order. He has taken the Situationist dérive one step beyond: writing lines in chalk on the streets of Oxford, which organically develops into an interactive art work with members of the public, including a class of Polish school children. The best fact of this show was finding out that it’s illegal to even think about the end of the monarchy. Imagine that. FIVE STARS : 4 stars for the show, but an extra one for the dissenting acts which created the show’s material.