Free (£5 donation gets a book of haiku) 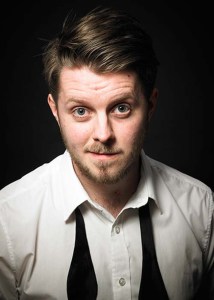 But according to Google

I think every lad I know would love to have James Bran as a pal – he just fits in with everyone, & when his comedy mojo is working its proper well funny. Somewhere in his mid-twenties (I presume), he has already gained an excellent calmness to the delivery of his material, which is placed somewhere between Quirksville & Southend-on-Sea. His show begins with a pleasant pre-amble, warning us of his twenty minute amnesty window when folk are free to leave without hassle, & also of how to treat any latecomers in the room – one is invited to turn around & give them a menacing, miserable look.

After these very pleasant pleasantries, Bran takes on a journey through his hilarious dream diaries, the invisible badminton of the show’s title, & the endorphin-inducing rush of tossing table-tennis balls at the wee basketball hoop set on his head (hasketball). Interspersed through these mighty comic highs are a series of hilarious haiku which he barks out to the audience as if he were Spike Milligan chortling through his limericks. The comedy that Bran manages to eke out of these syllabic brieflings of poetic brevity is amazing, as the following sample should reflect;

Condom in a hedge

Beside them owner’s knickers

You catch me flossing

Snuck into the loos

We had a little fumble

Then she took a shit

The twenty minute amnesty window passed without  a hitch, followed not long after by the pre-foreseen arrival of latecomers, who Bran, differing form his normal modus operandi, yelled at to ‘Get Out!’ From here on in, Bran managed to maintain his high level of hilarity, & if anyone is on the lunch break between 12-30 & 1-30, or just starting out in the festivities, there is no better place than in the warm & fuzzy feltlands of Bran’s mind.  FOUR STARS