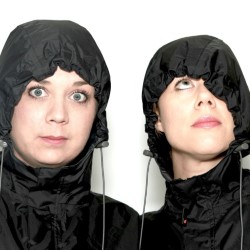 There’s one word to describe this show: Playful. Surely inspired by Thing 1 and Thing 2 from   Dr Seuss’s Cat in the Hat (“fun that is funny”), The Kagools–a pair of DIY Ninjas– run, jump, dance, fight, bicker (silently) and generally cause hysterical mayhem for the full hour. The Kagools are engaging from the off–a fist in the air, a few shapes, a blast of chirpy retro 70’s sounds and the audience decide: a roar goes up and we’re treated to some wonderful dancing eyebrows and the sound of salt-N-Peppa’s Push It. The retro music continues throughout the show—Chariots of Fire/I will always love you amongst many others–to move the narrative on and give rhythm to the comedy

The comedy is physical and facial. The kagools have great faces: sometimes silly for the sake of it-cross-your-eyes and hope to die; mock come-ons to the front row; petulance when arguing over sweets; but there’s a full range to illustrate every sketch-I loved their faces and so did everyone else. The fun is also developed through an interactive screen used creatively to enhance the physical comedy—impossible, gravity defying contortions; diving deep to save the drowning bear–it works brilliantly, and in a way the interactive screen is a modern update of many of the old classic silent comedies I remember watching in black and white on telly as a child: I’m certainly laughing just as hard now as I did then.

The show includes audience participation-and I found myself doing some moves I really shouldn’t have–much to the amusement of my 16 year old–and later to be posted on Facebook! However, one really lucky audience member got to eat a half-eaten chocolate bar, while the audience member dressed as a bear brought the show to its interactive crescendo–including a striptease and a water pistol fight—great fun. As I said—playful—they’ve got the keys to the sweet shop and we walked down the alley wet, feeling good and laughing. A brilliant show. FIVE STARS