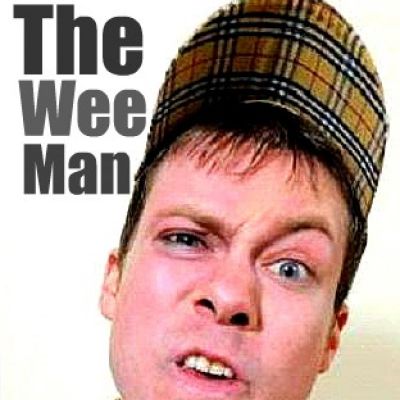 The Wee Man – aka Neil Bratchpiece – is an institution on many levels… an internet sensation for his brilliant videos,  a three-times a day buckfast buyer down his local offy in glasgow, & perennial source of laughter at the Edinburgh fringe. A middle-class Motherwell Weegie, he dons the Thalian mask of ned-dom with brilliant ease, so much so that folk from Paisley think he’s one of them in the same way that Detroit’s black hip-hop-cracy doted on Eminem.  I am definitely a fan of his work, & was well chuffed when his new show began with the following new video.

Watching this year’s show was a bit like watching ‘This is Your Life’ – an eight year retrospective through the life & times of the Wee Man. A slender fellow, who describes himself as ‘built like a silver rizla,‘ his use of recorded film is pure genius, especially when we see him fending off  his own creation in the most ‘kafkaesque’ fashion, battle-rapping him back into the recesses of his over-fertile mind. Splashing bits of his old shows into the mix, throughout the Syndrome we also saw Neil’s earliest attempts at fame, when he appeared on episode 21 of series 3’s seminal Scottish kiddy quizshow, Red, Amber, Green.

At the end of the show I’m like to myself, is this the end of the Wee Man – is this retrospective a sign Mr Bratchpiece is about to hang his chavvy outfit in the wardrobe. Or is it a grand shedding of the skin out of which a shinier, fresher, even more satirically cutting Wee Man will emerge? Only time will tell, but one things for sure, he’s still as funny as fu@k! FOUR STARS