Skip to content
HomePreview : The Return of Gilded Balloon 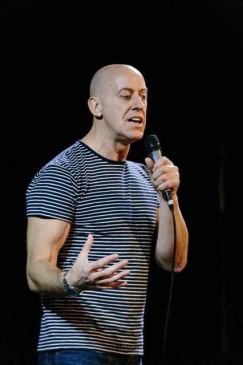 Gilded Balloon Comedy returns to Carnegie Hall, Dunfermline, Fife, for five nights of stand out, stand-up and riotous, comedy carnage, between February and June 2016. The line ups include a quality blend of up and coming comedians and the finest established comics on the UK circuit; with headliners Gary Little, Rob Deering, Al Porter, Loretta Maine and The Boy with Tape on His Face, providing some top class entertainment.

Kicking off the Gilded Balloon’s Fife Comedy Circuit on Thursday 4 February 2016 will be headliner Gary Little who is blessed with that special brand of Weegie banter: a gossipy, sharp-tongue with countless hilarious tales to tell.  He will be joined on stage by the delightfully deadpan, Stephen Carlin, and the one-woman voice machine, Amy Howerska.  Keeping both the comedians and the audience under control will be compere for the evening, Ray Bradshaw, one of the most dependable stand ups on the comedy scene.

Gary Little is one of the most consistently funny acts in Scottish Comedy.  He is forcefully opinionated but, with unflinching honesty and openness, he is not afraid to be up front with his failings.  His imposing physical presence – a 6’ 2” skinhead – and his masculine, sweary persona is undercut by his obvious warmth, personable style and slight vulnerability.

As a skilled storyteller he has that rare ability to weave mundane, every-day experiences, like dog walking and tenement living, into non-stop hilarity, which will have his Fife audience crying with laughter.  When Little speaks from the heart about such things as his man-of-few-words father, religious figures and sudden deaths, this is when he really shines.

Stephen Carlin, the Airdrie-born performer, rated by Stewart Lee in his all-time Top Ten stand-up list, has been described as one of the most inventive comedians on the circuit.  His exceptional use of language and off the wall references, brilliantly opinionated broadsides and trademark Scottish brogue make for hugely memorable routines.  From his sartorial elegance to his in-depth and hilarious knowledge of International snooker, Carlin’s performances take the audiences into the mind of a passionate obsessive.

Carlin has written for many radio shows including The News Quiz, The Now Show, Look Away Now, Recorded for Training Purposes, and Laura Solon Talking and Not Talking.  He has previously supported Stewart Lee, Stephen Merchant and Felix Dexter on tour.

Born to a trained killer father and a skydiving mother, rising comedy star Amy Howerska is a refreshingly unsentimental and gifted storyteller.  Presenting with vim, vigour and volume she’s a one-woman voice machine, populating the stage with barmy Welsh cousins, Bradford grannies and East End gangster-loving aunties. A stand-up since 2009, Amy Howerska has appeared on various ‘talking heads’ TV shows and was co-host of Edinburgh late night show Spank! in 2014, alongside James Loveridge.

Compere for the first Gilded Balloon Comedy night at Drygate in 2016 will be the thoroughly engaging Glasgow based comedian Ray Bradshaw.  His utter joviality and friendliness, coupled with witty and unexpected asides and great audience interaction, make him a real ‘people pleaser’; and raucously funny with it.  The double Scottish Comedian of The Year finalist has gained a reputation as one of the funniest and most exciting acts on the Scottish comedy scene.