Planet Caramel – a duo, with a guy who keeps following them about to all their gigs and endlessly writing himself into their sketches.

Imagine a man who looks like a cross between Lois Theroux and Frankie Boyle, performing with another man who looks like the love child of Orlando Bloom and Tim Minchin, then imagine watching them bulling a man, who can only really be described as a Crazy Wee Bear. Well, thats basically Planet Caramel. The trio took us on a journey through around ten, creative, slightly abstract and at times, pretty funny sketches. All lasting between thirty-seconds, to a minute and a half long. The pace was good and it suited the material well. Down lights signified the end of each sketch and on one occasion, they even managed to pull off a punchline which was essentially a sound effect, and actually got a really good laugh from the crowd.  About 46 heads were in the house, mostly students, but a couple of mature audience members made it out too.

The introduction was an explosion of ridiculousness, not ever quite reaching hilarious, but certainly lubricating the comedy chords, ready for a good giggle further on in the show.  The guys used lots of props, some insinuation and played on literal meaning, to execute punch lines and I enjoyed the variety a lot. The nervous paper aeroplane, the drums and the back gammon gags were my favourite; I think the audience agreed too. A theme of Robert Burns ran loosely throughout and a lot of gags could be particularly appreciated by 90’s kids.

The next act was made up of two guys and a girl. The entire audience had been well prepped for the style of comedy by this time and everyone was in the correct mood. It’s a difficult thing to warm up a bunch of strangers, mid week, on a windy and wet as shit evening in January. Watching the second trio was like being a fly on the wall in a typical student flat, and watching them do their housework on ketamine. They made a good gag at the start which made reference to the venue, and they performed throughout with good comedic timing and annunciation. They had great body language techniques for delivering insinuated lines which all built towards the punch line, and also used a change of props to signify a sketch change, instead of lights, making for a very dynamic performance. The material content was nothing short of brilliant, just when you think it was getting grown up, it didn’t. They played friends we all have and don’t need when sharing advice, they did a rather “Christmas in Holland” type homage to an international treasure; which was either gonna make or break them, but luckily they pulled it off well and got many laughs. And I have to say, their Taggart style sketch was excellent. Listening to them was like watching the cast of Made In Chelsea preform Trainspotting. So funny! And the Africa sketch had my eyes on the verge of precipitation. Was almost sad it ended, but by now it was time for the interval. Usually I notice these things, because I am not great at sitting still for very long, but I have to say, I was being so well entertained that I barely noticed the chair on my bum. 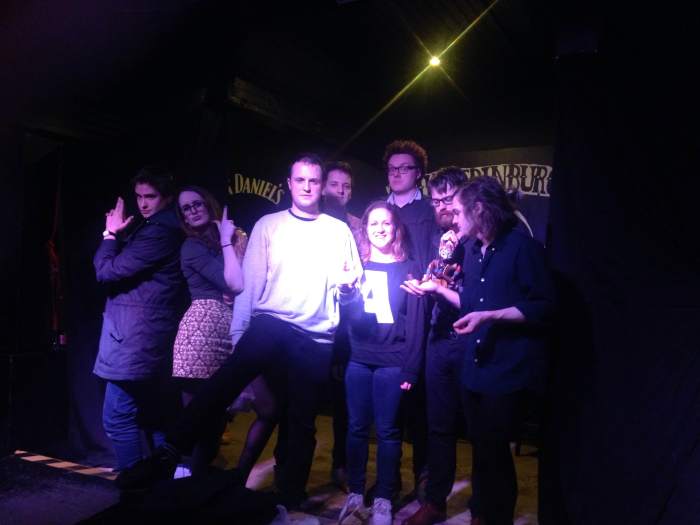 Post drink and loo break, I took to my seat and my notebook, for round two.

We were warmed up again with more by Planet Caramel, which was actually much better than their first slot, especially since “Frankie Theroux” had relaxed somewhat and was a bit less awkward on stage. They had asked the audience to write a short sketch of 8 lines or less for them to preform after the break. It actually went quiet well, with one joke getting good laughs all round. Another actually tickled the “Crazy Wee Bear” a lot, and I personally got a lot of enjoyment out of watching him have a proper wee giggle to himself of stage. They went back to doing a couple of sketches before introducing the final act. Tea in a tiny lift gave me emotions of meeting my mother-in-law for the first time. But, my favourite was the Italian sketch, particularly as my partner whom was with me, is Italian. I was doing “Tiny Hands” at him for the rest of the evening. I may get years of enjoyment from that joke, so thank you very much Planet Caramel. Shortly after, the next and final act were introduced, The Twins.

The Twins were compered by a pair of really annoying Scouser’s who were dressed like a pair of 18th Century hippies. Anyway, they were annoying me so much, I decided to take another toilet break. Even my bladder agreed we needed a prompt excuse to leave. If there is one thing that gets my goat, it’s when a compere pre-emptively apologises on behalf of the act. Piss off if you think it’s gonna be shite, why the hell I’m I gonna want to stay now?  So, anyway, you can imagine my disappointment when the lights dipped and lifted again to reveal the final act, was in fact the same two people, minus the outfits. My heart sank as I checked the time. Shit, I thought.

But then something happened. The twins, Jack and Annie started being themselves, and oh my god, they were absolutely hilarious. I mean, at times I was doing that laugh thing where no noise comes out but your nostrils are just flaring at 60mph. They had me absolutely decked. They were doing classic twin jokes, but you know, one is a tall bloke and the other a tiny wifey, so that was pretty funny, but actually what made them wasn’t their material as such, it was their chemistry. Their ability to banter ad-lib at an incredibly high speed, and finish each others sentences with a flow that makes their communication seem subliminal, all made the comedic timing seem well practiced and professional, but actually, as a sibling myself, I realise that biological chemistry can just come naturally like that for siblings who get on well. These two used it to their advantage well on the stage. They made you want an invite to their family’s house for Christmas, in no time at all, and soon you felt like you were less watching a show in a club, and more listening to a conversation between siblings over the phone, when they think no one else is listening. It gets weird as fuck, but what comes over is how normal that is. I loved the way they gave fast response banter to the audience, it’s different to observational comedy, it makes you feel like one of their pals, rather than a subject source for them to create material on. Party in America made me lose my shit. I remember talking like that with my sister when we kids after watching some American crap on telly, and the nostalgia made it seem even funnier. These guys nailed it.

Planet Caramel came back on to wrap up the show, finishing with Babadook Dave, played by the “Crazy Wee Bear”. I actually nearly had too much fun at this show. Totally wanted more. For £2, go and see them when they are back in Edinburgh on 25th Feb / 31st Mar. They should be charging more.