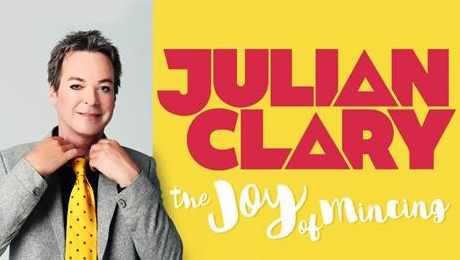 It’s not that Julian Clary isn’t a likeable chap. In fact, I requested this gig following sense of nostalgic endearment of seeing him back upon our screens in ‘Nature Nuts’. Sadly this was to turn out to be one of my poorer choices during the Glasgow Comedy Festival.

The intimate King’s Theatre (NB: Hosts around 1,000) is often a favourite venue for comics touring the UK without the scruffy, crumbling facilities some other places may offer or the hollow spaceship-evacuated arena that is the Glasgow Hydro. A throng of middle-aged ‘Hen Party’ types crammed into the seats while I settled myself behind a Bridget Jones-pants unveiling, opting not to spend the £1 binoculars hire on this occasion.

Whether it was coincidence or not, Clary stepped on to the stage with a mock-cover of Adele’s “Hello”; the Essex songstress who was entertaining the Hydro this very same evening. Resplendent in pink shimmering suit, Clary’s celebration of thirty years being a camp comedian was kicking off in Glasgow under the title “The Joy Of Mincing”. Recalling a tale of how he saved Dame Joan Collins’ life, Clary’s routine indulged itself in the effeminate style which the British public has come to love, savouring the spirit of ‘Fanny The Wonderdog’ (RIP Fanny nineteen years ago) and Clary’s recollections of being in full drag and trying crystal meth.

Clary stated that presently he is caught between two worlds – that of a children’s author and the other being the camp TV personality for which he is most familiar. Perhaps more revealing was the comedian’s disconnection from society, opting for a more rustic lifestyle in Kent countryside, writing books and frustratingly, not appearing on television quite so frequently since winning Big Brother 10 back in 2012. While Clary is the undisputed king of innuendo, this particular reviewer grew tired of such dialogue during a spurge of Adam Sandler films in the mid-noughties, and really ought to have known better than offer to review such a performance. A second innuendo-crammed cover of Nat King Cole’s “Unforgettable” brought the first 40-minute set to a close.

One glittery-costume change later, Clary returned to regale stories of meeting with the monarchy at the Royal Variety Performance, and award his Mincer Of The British Empire medals out to members of the audience. It was at this point that Clary hit both the high-point and low-point of the evening. Rather than sticking to the rigid scripted format of his performance, this allowed the comic to loosen up and improvise on stage with a few unsuspecting patrons from the stalls. Silly costumes and amusing small-talk were a delight and demonstrated Clary’s personal touch at it’s very best. An unfortunate gag concerning one of his selected victims, who turned out to be a widower and not divorced as expected, clearly caught Clary off-guard and for the next ten minutes, there were a number of stammers and handkerchief-dabs of the sweated brow in an effort to regain composure.

It was a moment which knocked the comedian out his stride and never truly recaptured. Titters in the crowd remained, but at no point during the show were there any proper belly-laughs or structure to where the script was heading. Perhaps the comic’s gentle delivery just lacked any real punch or conviction, or indeed was as startling as when he first appeared on our screens in the mid-1980s. Instead, Clary closed with two more parodies of popular songs – Frank Sinatra’s “My Way” and Bobby ‘Boris’ Pickett’s “Monster Mash”. The Lord of the mince skipped off stage, and was warmly applauded from his loyal fans. If only Clary knew that ‘mince’ means something else in Scotland.