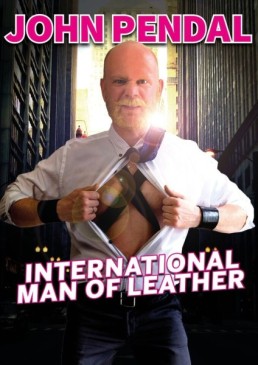 The Stand once again looks set to dominate Edinburgh’s Comedy Fringe as it regally resides over York Place with its impressive choice of six venues sporadically splattered along both sides of the street. Each venue considerately caters well to the thirsty audience by positioning itself close to a convenient watering hole or such like, providing refreshments, albeit in the form of the plastic pint, to the eager festival thrill seeker …such as myself.

Although this evening’s act was kicking off rather early to engage in such a tipple, it felt disconcertingly rude not to partake. And so, armed with a cold, squishy-plastic Magners, I nudged my way along the creepy Spielberg corridor to a cosy, if somewhat compact- studio (den) situated opposite the street from the original Stand venue, where I would witness the unravelling of Mr John Pendal, ‘International Man of Leather’.

Having little prior knowledge of Mr Pendal, I had only the rather intriguing and somewhat raucous title to base my preconceptions upon, and correctly predicted that the evening would have at least some level of ‘risque’ dialogue. Not to be disappointed, immediately upon entering the venue, I was presented with a pencil and paper, and politely asked to write down ‘something that turned me on’. Which I was assured would remain anonymous… Of course it would, I thought to myself, as I begun exploring my options and contemplating which inner secret to sully the innocent white square in my hand.

For a reasonably salacious headline, I expected perhaps a more intimidating engagement (and prepared for such by sitting myself as far back as possible, until I was all but perched upon the air conditioning unit). However, the man himself was anything but frightening, and in fact he presented himself as really rather endearing. Although “dressed as a lesbian” (sic) standing tall in a chequered shirt tucked tight into his jeans, and sporting a thin pencil black tie,  the only hint that there may perhaps be a more experimental side to this sweet natured rogue was the leather cuffs and a fleeting glimpse of some thick gold chains around his neck.

He embarked on a tale of his conflict with his strict Baptist upbringing and how he came to be crowned International Man of Leather amidst some strong competition, delivering fluid, punchy and often genuine hilariously comic observations. He relates the surprising and vastly contrasting international attitudes to sex from Asia to Europe which he encountered during his colourful travels. He challenges the essence of religion with stark logic, intriguing facts, fast-paced wit and comic tales, all the while, pacifying any potential offence in the audience with large fluffy kitten placards.

The audience genuinely warmed to this endearing man, whose sexual exploits and adventures as he travelled all over the world in his acclaimed title seemed remarkably contrasting to his gentle, rather conservative presentation. And it was apparent his genuine desire to break down preconceived notions against self-expression and sexual exploration. His set was cleverly presented with a splashing of retro vibes and geeky science, engaging the audience with clever ideas, such as engineering three-dimensional sexual orientation graphs while throwing in some nostalgic comedic references to Tupperware and Thunderbirds.

Given this was the first night of the performance, it was excusable that his first few jokes were lacking somewhat in delivery, but he quickly recovered and gained confidence, settling comfortably into his set and winning the crowd round effortlessly. Perhaps he could have been a bit more risqué, I believe he had a few more ‘water sports on acid’ stories up his sleeve, but overall, he delivered relaxed and intelligent stand-up comedy, often fascinating and insightful – and I have left with a new-found desire to visit Japan, for an entirely different set of reasons.