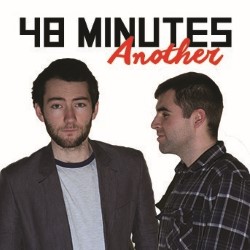 Ben Shannon (Nottingham) & Mike Reed (Merthyr Tydfil) are old Uni mates – they love each other & their love each other’s comedy in equal measure. Last year they found themselves on the geographical fringes of the Fringe – Moriarty’s on Lothian Road -, liked it, & decided to come back & do it all again. Its location, actually, is good –  its more like a machine-fun border post for West Edinburgh, trying to take folk out with laughter before they hit the battlefield. Going there’s a bit like going to Skye – its a bit of a trek but its worth it!

Bright, cheerful and consistent, this was great free comedy by a determined duo.  The show is divided into two – Ben is a cheeky wee surrealist, who feeds on the audience energy like a jack russel wanting to go for a walk when it sees its owner get his shoes on. Back and forward his banter went, as with a questionnaire of curios questions they dug deep to find the fun in peoples occupations.  For the second half, Mike is a classical joke-teller, all of which are buzzing amidst the perfect storm of his mind. The two styles on offer make for a good blend throughout the hour.  With slap-stick jokes about family and girlfriends & modern life, they managed to get their increasingly talkative audience to chuckle along like a leaf on a river in May.