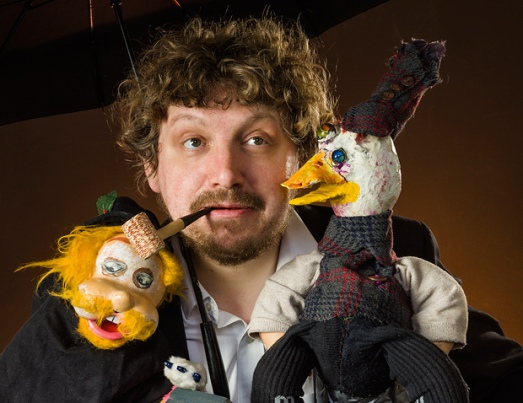 On a cold wet miserable Edinburgh night I found myself upstairs in the Aprex Hotel, awaiting the wonder that is Paul Vickers.  We were here to witness the birth and demise of Twonkey’s Mumbo Jumbo Hotel & with a name like Twonkey  I was not sure what to expect.   My curiosity was getting the better of me. Emerging from behind a black curtain with puppet in hand, which looked like it had just come out of a witches cauldron, the room ballooned with instant laughter! The stage before us contained a minature set which reminds one of a child’s bedroom, while our host resembled a 1970’s children’s TV presenter. All this made a direct impact with the audience, that with a bewildered look on their faces looked completely baffled…

This is a comedy show with all the trimmings, mixing puppetry with accompanying soundtracks, we were cascaded down a waterfall of laughte – being tossed back and forward from sketch to sketch you are soon caught up in the mayhem of Twonkey’s Hotel.  With a coconut duck and a singing tree stump, one audience member looked dumb-founded.  This was an intriguing piece of comedy. Like a mad professor from another planet, he appeared to be more nutterey than Nutella. With psychic knickers, finger-puppets, miniature people, dynamite, and a chainsaw this allowed the audience the chance to participate in the madness at hand. Mumbo Jumbo Hotel is a throw back to childhood fun, with humour that punches you in the head, & in the bruise linger fond memories of days long gone.

With the puppet sketches, well-written hilarious songs and crazy dance moves, Mr. Vickers did get the unsuspected audience in stitches of laughter. Caught up in a wonderland of toys, mad impressions, miming, crazy jokes, this was all rather gob-smacking. An imaginative piece of theatrical comedy that will have an impact on all who see this show. If you have a cheeky one hour to spare at 9PM this August, take a journey back to your youth with Twonkey’s Mumbo Jumbo Hotel and you wont be sorry….