The Stand in the Square 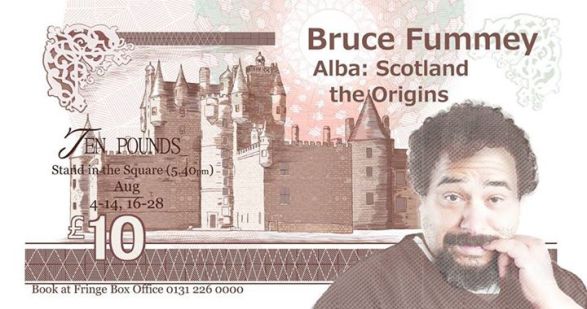 We struggle for more than an hour to find somewhere nearby the venue to get a sit down meal to no avail. I’ve decided to go out on the busiest day of the fringe or so it feels. The world’s largest arts festival is a symbol of Scotland’s success in the world and I’m visiting a show which attempts to look at the origins of Scotland.  Where did this band of noble savages come from?

I’ve never seen Bruce play before, despite him being from my neck of the woods, Perth (as well as being half-Ghanaian).  We’re in a packed yurt in St. Andrews square.  After Bruce asks the crowd, it appears mainly Scottish and English but I think there were many folk from further afield unwilling to raise their arm for fear of retribution.  I was with one! To be fair Bruce’s jibes at national stereotypes are aimed at all including his native country.

The opening part of the show is a hilarious love-in about history (History Channel +1 – for those who like their historical a tiny bit more historical), haggis hunting, Scottish history and fucking the Tories.  He was excellent and totally at ease with the audience and felt in some ways like you had known him for years (or at least 5 pints).  Bruce adeptly deals with a heckler; he’s clearly dealt with much tougher audiences that this partisan yurt rabble.

Bruce makes good use to slides to illustrate the scots journey from tribesmen fighting the romans and Vikings right up to modern times.  The part in the middle is more factual than funny but it’s certainly informative and accurate (some of it) and I actually learned a couple of things I didn’t know.  Bruce apologises for this part of the show by saying he is not going to apologise.  I thought it was really excellent and an interesting light-hearted section from a passionate firebrand Scot.

My only criticism is that the show didn’t last 10 minutes or so longer.  The educational part of the show affected the pace and although he went back to the comedy afterwards it was too short a time to get the audience back where they were before.  That said Bruce’s show was thought-provoking and coherent effort from and engaging home-grown talent.