Russell Kane is a changed man. For his Right Man, Wrong Age tour, you may encounter someone with a new look, fresh perspectives and a different approach to his comedy. “In the last year I’ve been married and had a baby. I’ve changed my hair, I’ve changed my look, I’ve thrown all my eyeliner in the bin. I literally went to my wardrobe one day and got all my ridiculous clothes and took them to the Sue Ryder shop for some other man having a midlife crisis then bought the four exact same suits in different colours from Topman. Then I got my hair as flat as it can go and I thought, ‘that’s it: this is me now’.” 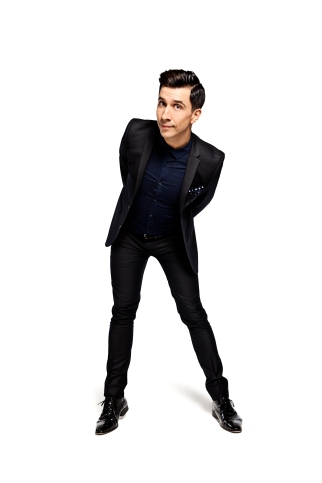 In fact, Russell can pinpoint the exact moment when he needed to alter his outlook and write a new show. It started with somebody at the door . . . “I’m always looking for the moment that can make me look ridiculous in a way that is compelling. I was in the middle of spray-tanning myself upstairs in these tiny pants when the doorbell went. I went downstairs in my dressing gown and this window cleaner was touting for work. He leaned in and said, ‘I’m really sorry to disturb you: is your mum or dad in at all?’ Initially you might have thought this was a compliment, but it’s really not. He could be talking about how I’m putting myself across so I thought: ‘clothes in the bin’. And at that moment, there was Right Man, Wrong Age.”

In the world of stand-up, acts are continually expected to evolve and grow and turn over a significant amount of material every one or two years. For some this burden might prove too much, but for Russell Kane this is a challenge he relishes. “I’ll keep changing, and I don’t really ever want to stand still. I don’t care if it confuses people about where I’m coming from. I’m protean; I don’t want to be recognisable in five years’ time; that’s what keeps my writing going. One day I’m learning Spanish, the next I’m learning survivalism. I might do my maths GCSE next week: who knows?”

For now, though, Russell is focused on making Right Man, Wrong Age the best show it can possibly be. His topic this time around is how we never quite feel the life-stage that we’re in and the age that we’re at, whether we’re 80 or 18. “When you’re 18, you look in the mirror and think ‘I know what I want to do, so why am I trapped in this 18-year-old body?’ while the 80-year-old is still waltzing and dancing around in her head. That’s going to be my jumping off point and from there I’ll do lots of accessible observations as well as the odd thinky bit. But I don’t want to disappear up my own bum with this show, I just want to go on in my suit, like Michael McIntyre or Peter Kay, and just be funny and have lots of big laughs. My only job in life is to be funny.”

Inevitably, his new fatherhood status will have to be addressed in his show. As ever with Russell, he’ll work hard to avoid easy clichés and tired stereotypes as he tackles a subject that has been raised on many a stage by several generations of comedians. “It’s so hack to talk about having babies that I need to find another way in. It’s like walking into Pret at 5pm and there’s one boiled egg left: that’s what’s left to say about childbirth. But when you’re coming at it from a male point of view, you need to find a way in. I’ve never heard a man talk about caesarean section, so that might be the way to go.”

If you’ve seen Russell on stage, you’ll know there is a physicality to his act which matches the blizzard of ideas and words. So, how does he wind down after a show? “Nothing exotic, just a glass of red wine. I would like to get to bed earlier, but I need a good movie or, if I’m feeling particularly tired, something like Towie or Take Me Out; something that lobotomises me. I’m always reading good stuff, but now and again you need a burger because you can’t live on quinoa all the time. So I need something mega mainstream to bring me down.”

Normally in the run-up to a touring show, Russell will have almost a month of preview gigs under his belt. This time around, he had to ditch most of those plans to film his BBC series, Stupid Man, Smart Phone, for which he jetted off to various inhospitable parts of the world (the Arctic Circle, North Africa and Costa Rica among them) to see if he could survive purely with the aid of a constantly fully-charged mobile device with a permanent Wi-Fi connection. This is another example of a man who constantly wants to stretch himself, both physically and intellectually, whether it’s going on to Radio 4’s Saturday Review alongside AS Byatt to discuss the new Julian Barnes novel or writing his own next literary work. In 2012, two years after he won the Edinburgh Comedy Award, Russell published The Humorist, the tale of a tormented comedy critic who discovers the secret blueprint for humour, and he is continually working away on future literary projects.

Kane also has ambitions to tap into the online market with his stand-up. “I’ve not really seen other stand-ups doing it; I’ve seen some using their social media and doing bits of sketches but I haven’t seen many take the risk of doing stand-up down the barrel of a camera, posting it and seeing what happens. I did a thing recently, which I called The Kaneing, where I looked at a celebrity news story and put it on my Facebook wall. I was worried it might seem a bit embarrassing and desperate, but it got 64,000 views overnight.”

The popularity of Russell Kane is in little doubt, but he’s keen to make the most of his time at the top of the British stand-up tree. His sense of gratitude for the job he’s doing is palpable and he confesses that touring the country and making people laugh is something he will never tire of. “I love it. If I ever have a bad day and feel miserable, I think about the things my family have done for a living. The fact that I can walk into a hotel, lie on the bed, watch a sci-fi movie, go and do an hour’s work on stage is incredible.”

Russell will be performing in Scotland on the following dates: