This weekend Gary Little will be headlining the Big Show 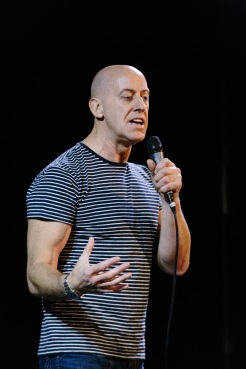 THE MUMBLE : Hi Gary, where are ya from & where ya at, geographically speaking
GARY : Glasgow

THE MUMBLE : You’ve done the Monkey Barrel before, how do you find the audiences
GARY : Great crowd

THE MUMBLE : When did you realise you were funny
GARY : At school I was the guy that made my pals laugh, and the girls hated!

THE MUMBLE : What inspires you to write
GARY : I’m someone who likes to tell stories, usually about myself. I’m fortunate that a lot of shit things have happened in my life, and people seem to like listening to these things

THE MUMBLE : What’s your favorite joke (by someone else)
GARY : I can’t think of anything specific just now

THE MUMBLE : Ok, instead of your favorite joke, how abour your favorite comedians
GARY : That’s as hard! Billy Connolly and Chic Murray are just 2 of them

THE MUMBLE : You’re not afraid to admit you’ve served time – in fact it formed the basis of your 2009 Fringe show – where did you find the humour in incarceration
GARY : Prison is like a big school for adults, so there’s plenty of humour there.

THE MUMBLE : You’ve also done a number of comedy workshops for the prisons – can you tell us about the experience
GARY : I went in to give young offenders the opportunity to get some confidence. To feel ok about expressing themselves in front of their peers

THE MUMBLE : What does the rest of 2017 hold in store for Gary Little
GARY : Hopefully just getting more work. Along with Julia Sutherland(comic) I’ve just had a 4 part radio show (Jail Mates) broadcast on Radio Scotland. Radio 4 might be interested in commissioning a second series. That would be nice