–
Hello John, so where ya from & where ya at, Geographically speaking?
Well, as was once said ‘it ain’t where you’re from, it’s where you’re at’ – which works out pretty well for people like me who can’t say much good about where they come from. I was born in Preston, schooled in Chorley, and live in Euxton. I’m as northern as they get. Where I’m at is still Euxton for home life, but most of my comedy life is spent in Manchester or visiting further-flung places via the use of Piccadilly Station.
–
When did you first realise you were funny?
I’m not sure I ever did! I could always make people laugh in private, small groups, or doing presentations for my degree (you need the help of humour when you do IT, it keeps people awake), but I didn’t think I’d necessarily make it to the stage.  Until the first time I tried, and people laughed.  I guess it was then.  So that’d be December 5th, 2012, at the Frog and Bucket, Preston.
–
Who are your comedy idols?
Let me say first that I purely have performer idols, like Springsteen and Paul Westerberg, but in terms of comedy, I knew I wanted to do it when I heard Bill Hicks, George Carlin, Sam Kinison, and Billy Connolly.  The precise definition of idol should probably mean that I sound somewhat influenced by them in their work, but I don’t think I really do, I just admired them and the way they went about it, particularly Billy Connolly, for whom it was essentially a chat down the pub in front of thousands of people.  One of the things that gets said about me the most is that I have a ‘conversational style’ – and I think it probably comes from that.
–
Upon which life-experiences do you draw your own comedy?
All of ’em! That’s the entire show this year.  In my life I’ve been (and still am) disabled, depressed, in love, broken hearted, inspired, lonely, and all kinds of things.  My experience of love, depression and comedy all come through in my work at different times.  In one sense I try to let my feelings out on stage, because suddenly when you can laugh at them, they don’t seem like the big deal you thought they were.
You came an honorable second in the XS Manchester Comedian Of The Year this year. Can you tell us about the experience?
To be honest, it was all a bit surreal. I went from starting a new job, about two weeks in, to doing a heat in front of Justin Lee Collins and a couple of other judges in the Old Monkey in Manchester.  To top that off, I sailed through the heat so well that Justin wanted a beer with me! (I had one).  Fast forward to the final, and I had a great time, but just got edged out by the lovely Dawn Rigby.  It was nice to finally have something to put on the CV, and there’s something prideful in me having something against my name that applies to my favourite city in the world.
What does John Porter like to do when he’s not being funny?
Desperately search for love, but I’m also hugely passionate about music – I couldn’t live without it.  Sometimes I write, and other times, I watch sports.  I’m a massive football and NFL fan.  Liverpool and the San Francisco 49ers, in case you’re wondering.
You brought your ‘Lunatic of the Fringe’ to Edinburgh last year – how did it go down?
It was alright.  For me, it was a bit like a team from League One getting to the cup final.  Just the occasion meant the most to me, and the fact that (some) people would pay to watch me perform at the biggest Fringe festival going was quite something to think about.  The show could’ve been better, I’d do a lot differently, but it was one of the happiest times in my life.  This year, it’s more about having improved my squad, to continue the metaphor, and changed my tactics a little, I’m having a proper tilt at the title.
–
This year you are bringing us ‘Five Years Time.’ Can you tell us about it the show? 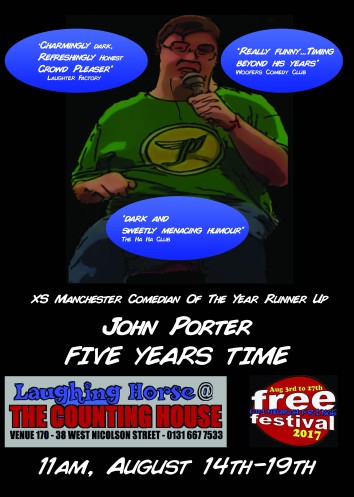 Five Years Time is a show about how ridiculous the interview question ‘where do you see yourself in 5 years?’ is.  I don’t think anyone knows the answer, although I did have a sarcastic one (one of my favourite jokes in the show).,  I had to answer it at the time to try and get the jobs I wanted, but the whole show is about having no idea how wrong I would be at the time.  In hindsight, looking back on June, July and August 2012, I had little idea where I would be in 5 months, let alone years.  The show is about comparing expectations to reality – comparing me then to me now, the person I was and who I am now, and whether I am where I expected to be.  Spoiler alert: the answer is no.  The reasons why are in the show!

–
One of the things I always say about my comedic style is that I made it anecdotal purely so no one else could be me, and in this question’s case, that answer applies.  It’s my story.  It’s fun in parts, sad in others, and surprising in many.   But one thing I am sure of is that it’s totally unique.  Even at a Fringe festival, I am 100% certain there will be no one who has my story in quite the same way.  To battle a disability, while growing up, working for the first time, doing stand up comedy across the UK, then falling in love (I will spoil that that bit didn’t end well – but the story is quite funny – at least nowadays), and somehow still going on and changing your entire life in five years?  That’s a unique story, and only my show has it.
What lessons have you learned from last year?

Hmm. I think every Fringe year has some learning to it.  But last year, I think I learnt:

– Don’t go paid when no one’s heard of you.
– Know what you want your show to be.
– Know how to sell it properly.

What will John Porter be doing after the Fringe?
About two weeks after, I’m off to San Francisco for a holiday and to see my beloved 49ers – beyond that, who knows? I have an idea for a 3rd show, but time will tell if I think it’s worth progressing. One thing I am certain of is that I will still be doing comedy.  It’s a lifeblood to me and unquestionably the greatest thing I ever did for myself.  That’ll never go away.
————————————————–
John Porter will be performing @ The Counting House
August 14th-19th (11.00)