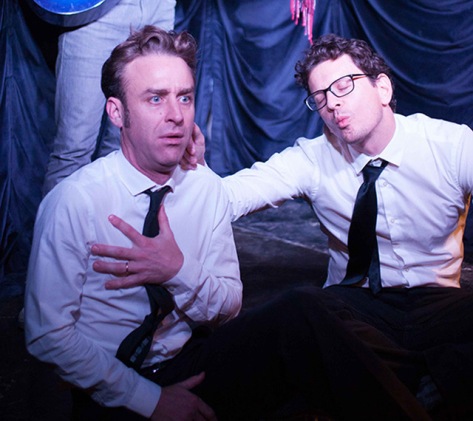 Hi lads, so where ya both from & where ya at, geographically speaking?
Jon : I was born in London and Nath was born in Melbourne. I moved to Melbourne and lived there for a while where I met Nath. Then we both moved to London and have been living here a while. There’s a nice symmetry to our geography.

Can you describe your chemistry with Jon?
Nath : Jon and I are brothers. We’re twins in the womb and he’s the one who gobbles up all the food, leaving me malnourished and gaunt. We disagree about pretty much everything except our own comedy work. We actually fell out for three years and it’s really helped us come together with even more antagonism than ever before. I asked Jon to marry me once, bought him flowers, got down on one knee and everything. If he’d said yes, this year I’d be giving him a silver sugar bowl for our 16th anniversary. True story.

When did you realise you were, well, funny?
Jon : I think everyone has the ability to make other people laugh but getting paid for comedy the first time was a landmark night. There is no better sound than the sound of laughter you’ve created. Equally, there is nothing more crushing than hearing some guy yell out “You’re not funny, you ugly wanker!” from the depths of a darkened room. So in conclusion probably around mid-2000. 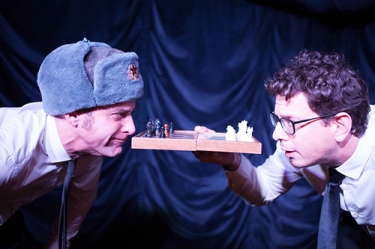 What are the inspirations behind your own comedic output?
Nath : I grew up in Australia watching excellent British TV comedy like Kenny Everett, The Young Ones, Blackadder and Fry & Laurie. And Aussie stuff like Fast Forward, The Comedy Company, The Big Gig and The Doug Anthony Allstars. So I like a bit of anarchic danger underpinned by well-written, well-rehearsed material, and recurring characters. I grew up on sketch comedy and have always loved doing it. Lately I’ve been training in and watching a lot of clown (I’m also doing a solo clown show this Edinburgh Fringe called ‘The Stuntman’). I’m inspired by everyone I see doing comedy, there are limitless perspectives on what is funny and how to generate laughter.

How did you guys meet?
Jon : We saw each other’s shows in the Melbourne International Comedy Festival, then went out drinking on the beach. Nath and I were smoking, and he said “Don’t drop the butt in the sand, I’ll put them in my pocket.” I was just about to say the same thing to him, so a life-long friendship was born! We were socially aware before it was cool. Oddly we have almost nothing else in common whatsoever. 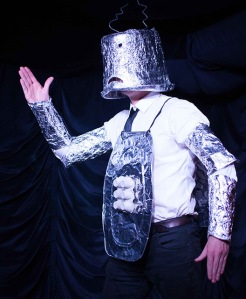 What’s the difference between an Australian audience & a British?
Nath : Audiences in Australia like to have comedy thrown at them, whereas in the UK people examine everything you do, and appreciate nuances. It’s a difference of subtlety.

You’re bringing ‘Jon & Nath Like to Party’ to the Fringe. Can you tell us about it.
Jon : ‘Jon & Nath Like To Party’ is a pretty sweet sketch show we have been working on since Camden Fringe last year. It has everything from incredible robotics* to stella guest appearances**. We’ve worked really hard to get the show to a relentless pace, mixing the absurd and satirical without overdoing either.
*Jon in a shitty tin-foil suit
** Nath’s below-average impressions

What are the ingredients to a good sketch?
Jon : I think stupidity, bad accents, wigs and fake moustaches while Nath insists it is good craft, clever writing and lots of rehearsals. We meet in the middle and that’s what makes ‘Jon & Nath Like To Party’ so good. 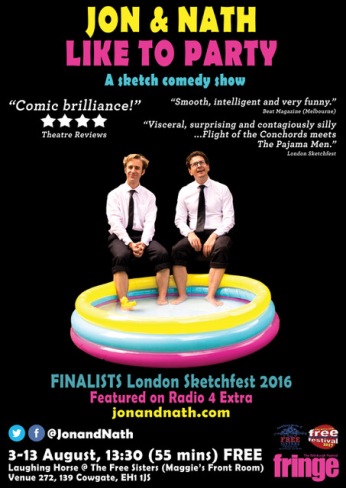 You performed ‘Jon & Nath Like to Party’ at the Brighton Fringe. Have you been making any tweaks since then?
Nath : Yes I’ve tried to write Jon out of the show but he keeps turning up at gigs. We’ve been working on ‘Jon & Nath Like To Party’ for a year, so Brighton Fringe was a version we are very happy with. Our aim is to create a sketch show that also communicates our relationship through an underlying narrative of thwarting and one-upmanship. By the end we’ve messed each other up pretty good. At our latest preview we started bitching about each other directly to the audience, but it’s really quite sentimental too.

What will Jon & Nath be doing after Edinburgh?
Nath : I heard an anecdote about what Miles Davis and John Coltrane would do after jazz gigs – Davis would go out partying, and Coltrane would go home and practise the bits he wasn’t happy with. Jon and I will probably just do the Davis. Then we’ll keep booking gigs, writing, filming, working on a new show, and hopefully touring ‘Jon & Nath Like To Party’. The lols aren’t going to make themselves (until we’re rich enough to pay people to make the lols for us and package them for internet orders).

Jon & Nath will be performing at the Edinburgh Fringe