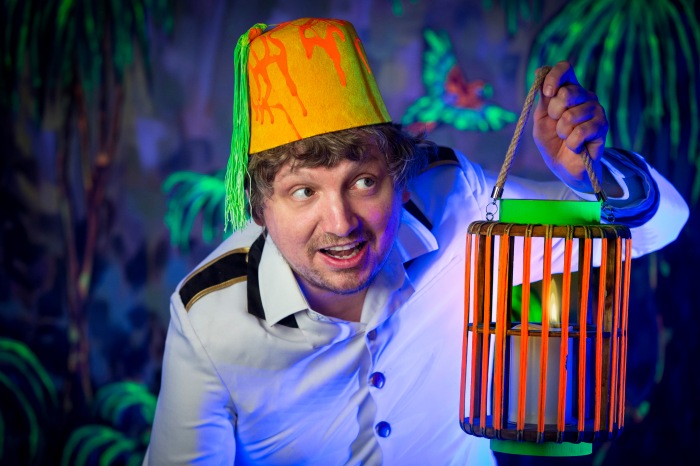 Hello Mr Twonkey, so where ya from & where ya at, geographically speaking?
Edinburgh.

Can you describe your creative relationship with co-star, Paul Vickers?
Twonkey is an innocent; he always has a mission that would seem foolish to many. This year it’s trip to the jungle over Christmas to play at an imaginary fringe festival. Would I do that? No, never. Is Twonkey in any way similar to me? Of course not.

Which for you was the most rewarding?
Last year I did two shows, which was a lot of fun as it turns out but a lot of hard work and planning I mean it’s twice the work. It’s like doing a double album in one year. So that was the most rewarding definitely by the end of it, you could sleep for a week but you felt good about yourself like swimming the English Channel kind of good.

How was your recent trip to Brighton?
It was so hot so flyering for a Christmas show seemed bit nuts. I learnt a lot from it and have made a few adjustments to the structure of the show. They’re an open-minded bunch down in Brighton but sometimes that’s due to substance abuse. It’s a lively town that knows how to keep you up all night.

Can you tell us about this year’s installment?
Mr. Pines is a new character that I play, he’s my manager but he wants to kill me. I wear a fake nose and sunglasses and people boo me, he’s like a pantomime villain. He’s the one that’s sent me to the Jungle, he’s hoping I get lost and never come back. He has other acts that are more commercially viable so he wants me off the books and out of his hair for good.

When he’s in Edinburgh, what does Mr Twonkey like to do between shows?
Seeing the other shows is fun and as I know the city well I know how to cut about fast and light. I drink a lot of smoothies at the Hula juice bar. I have dinner with friends, I go to the pub and have the odd pint and do mixed bills sets here and there as well as my own show.

What is it about performing live you love the most?
When it really works and everyone gets onboard and enjoys the ride with you it’s the best feeling ever.

In one sentence can you describe the experience of performing in Edinburgh in August?
An intense overload for mind, body and the soul.

What does the rest of 2017 hold in store for Mr Twonkey?
More Twonkey and a new Paul Vickers and The leg album is been cooked up as we speak.

One thought on “An Interview with Mr Twonkey”