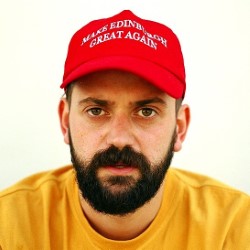 Hello Fin, so where ya from & where ya at, geographically speaking?
Oxford. So please in future use ‘you’ rather than ‘ya’. Currently i’m in the south of France on an arrogant pre-Fringe holiday.

What is it about performing live you love the most?
Hard to say really, but it is an addiction. I’m not sure it’s a feeling i’ll ever get tired of. New material nights especially. Such a thrill having a thought on the way to the gig and then it working- out of thin air you have created something that people will pay you to say. It’s magic really.

You’ve been washed up on a desert island with a solar-powered DVD player & three films. Which would they be?
Con Air, The Rock, and Gone in 60 Seconds

Why stand-up comedy?
Again hard to say, but i have this instinctive, almost existential pull to this sort of performance, and i’ve felt it since i was like 13. I wrote and performed some sketches with guys at school and although they were great guys, both really funny, i still knew that stand-up was what i’d rather do later on. I guess it’s the idea of being a sort of Author/Director/Performer all on your own. It’s total control.

You were gigging on the West Coast of the US around the time of last year’s election. Now the West is a liberal place & one would expect its comedians to be anti-trump. Was this the case?
Yes I was in LA and San Francisco, obviously everyone was laughing at the madness of Trump’s campaign. A lot of the US comics were laughing at how badly he was going to get beaten, and so it was a good angle to have to come on with you know. A Brit, post-Brexit, having a go at the crowd because they were so sure it wasn’t going to happen, and i was pretty sure it was.

Last year your ‘Whitey McWhiteface’ smashed the Fringe. Why do you think it resonated so much with the zeitgeist of 2016?
Well that summer if you remember it seemed like 3 times a week you’d log on to Facebook and there’d be another video of an unarmed black guy getting killed by the police in the US; and BlackLivesMatter was marching in the UK. And after Brexit incidents of racially-motivated crimes were on the rise, it was a summer where racial tension seemed to reach boiling point- which in the UK was quite unusual, we’re so silent on this stuff normally and seem to sweep it under the carpet- everything’s so latent compared to the conversation about race in the US. But after Brexit these things seemed to be coming above the surface. And so a show where a white liberal was trying to work through what it meant being white in this country from their perspective felt quite relevant i think. Also it was a good show.

This year you are bringing Lefty Tighty Righty Loosey to Edinburgh. Is it a sequel to Whitey McWhiteface or does it have a spirit all of its own?
It’s very much it’s own show. But in Whitey McWhiteface I feel I found the sort of topics I like talking about and the angles I like taking. But i feel i’ve moved everything forward, gone a bit deeper, tried to articulate things clearer. It’s more about being left-wing than being white, but there’s still a bit of honky shit in there for old times’ sake.

Can you tell us a little more about the show?
I’m weaving my opinions on the failure of left-wing politics, and the immorality of some left-wing attitudes with ridiculous stories from a pretty intense few months personally. It’s all good clean stuff.

In one sentence can you describe the experience of performing in Edinburgh in August?
It’s my favourite time of year.

What does the rest of 2017 hold in store for Fin Taylor?
Taking the new show out on tour. www.fintaylor.com for dates. Not yet mind, but I will put them up at some point soon.

You can catch Fin in Edinurgh this August