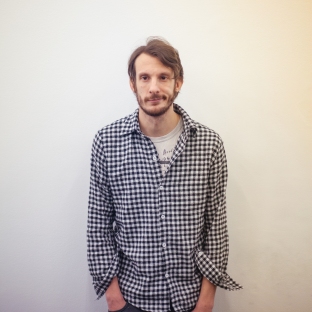 Hello Matt, so where ya from & where ya at, geographically speaking?
I hail from Brighton, which is one of the best cities in the world. I’ve just moved from London after living there for 4 years to Edinburgh because who wouldn’t want to live in Edinburgh? Apart from Nigel Farage of course!

When did you first realise you were, well, funny?
Being told to shut up in staff meetings during the various jobs that I despised in my 20’s.

Upon which life-experiences do you draw your own comedy?
How terrified and disenchanted I feel on a day to day basis about every aspect of life. And my fondness for angel delight.

You’ve been washed up on a desert island with a solar-powered DVD player & three films. Which would they be?
Shaun of the Dead, Eternal Sunshine of his Spotless Mind, The Land Before Time 5: The Mysterious Island. All of them teach us about how we should be happy with what we got, but only one teaches us how to deal with a mysterious island using only your wits and your friendship with a pterodactyl.

What are the secrets of a good joke?
An original idea that is relevant and relatable that you don’t remember ever having, a punchline that has the right number of words and rhythm that you only get to after messing it up for a year, by which time the joke is no longer topical enough to do.

How are you finding living in Edinburgh?
It’s amazing and I absolutely love the city and the beautiful surrounding area. Best pubs, great cinemas and theatres, amazing people and plenty of discount supermarkets (I live next to a Lidl/ Iceland combo store!). I even enjoyed visiting Dunfermline. However, I am still not used to having conversations with neighbours that last 20 mins or having the heater on in July, but I’m sure I’ll get used to that. Right!!?? 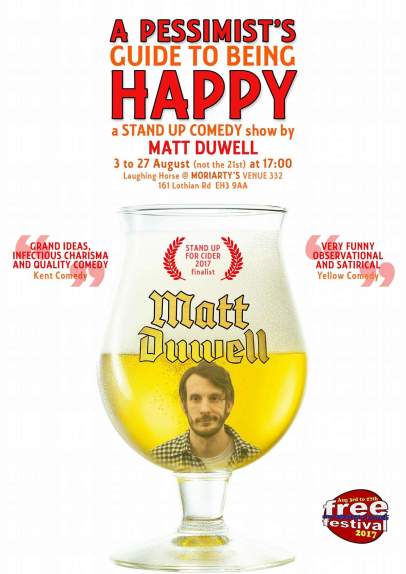 You are bringing your show, ‘A Pessimist’s Guide to Being Happy,’ to the Fringe this August, can you tell us about it?
It’s a stand up comedy show about how pessimism can sometimes actually help us to be happy and optimism and memes about unbound potential are not necessarily a good thing. It’s also a show that has some crowd interaction and of course a lot of jokes that are quite glib about the world we live in. I’m very proud of the jokes and in many ways, it’s the result of my entire comedy career so far. It’s also the one thing that haunts my dreams more than the Giants from the original BFG film.

Can you sum up your show in a single sentence?
Pessimistic, funny yet positive.

This is your third time at the Fringe. How have you found performing at the mega-mash-up that is Edinburgh in August?
I’ve met some of my best friends, formed closer bonds with people I already knew, had some of my best shows, seen some of the best performers in the world and learnt a lot about myself and who I am. I’ve also met some of the worst people, lost friends, had my worst shows, seen the worst shows ever and learnt what a jealous, miserable little man I can be at 4pm on a Tuesday. I’ve felt both the most elated in my life to the most dejected and every possible emotion in between. I’ve also eaten far too many tatty dogs from the piemaker on south bridge and drank too much tenants.

What does the rest of 2017 hold in store for Matt Duwell?
Recovering from Edinburgh, hopefully making inroads into the Scottish Comedy Scene, writing more jokes and working on next year’s show to take to all the various fringes next year. Also getting central heating installed in my new home.

You can catch Matt at the Fringe

2 thoughts on “An Interview with Matt Duwell”