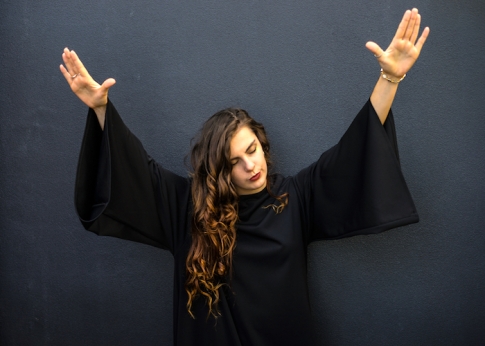 Hello Kaitlyn, so where ya from & where ya at, geographically speaking?
Kaitlyn : Hi there! I’m from Queensland, Australia or the ‘sunny state’ where it’s 27 degrees celsius in winter.I’m currently struggling to adjust to the Scottish ‘summer’ here in Edinburgh.

When did you first realise you were, well, entertaining?
Kaitlyn : It was Christmas Day in the year 1996. I accidentally drank something that I thought was milk. Turns out it wasn’t milk. It was bleach. True story. My family still talk about it. No one was bored that day!

What does Kaitlyn Rogers like to do when she’s not being funny?
Kaitlyn : Rap, mostly.

You’ve been washed up on a desert island with a solar-powered DVD player & three films. Which would they be?
Kaitlyn : Sister Act 2: Back in the Habit / Ace Ventura 2: When Nature Calls / Grease 2

What is the difference between a UK audience & that of your native Australia?
Kaitlyn : Doing comedy in the UK as an Australian is great because you’re kind of a novelty. Meaning you can say things about Australia like, ‘What’s the deal with emus?!’ and people think it’s a bloody hoot! Whereas if you say that back home, you’ll probably have glass thrown at you. Meaning crowds where I’m from are quite rough and here people seem up for a laugh.

Have you ever been to Edinburgh before whether visiting or performing?
Kaitlyn : Yeah, I did the fringe a few years ago. I was a puppeteer on a kids show about Australian dinosaurs.

You are bringing your show, ‘Can I Have An Amen,’ to the Fringe this August, can you tell us about it?
Kaitlyn : Can I Get An Amen?! is a sermon about Whoopi Goldberg. It’s a late night comedy extravaganza that’s all about being sassy. What is sass. What it takes to be sassy. And its based on the sassiest bitch in the world: Whoopi Goldberg. And for anyone who watches the show, RuPaul’s Drag Race italso refers a lot to drag queens. I wear a skin tight leopard catsuit and rap. It’s the ultimate late night cult party show with a tonne of glitter.

Can I Get An Amen has gone down rather well, winning awards & all that, what has happened exactly & how do you feel about it?
Kaitlyn : I don’t know exactly. I wrote and devised the show myself by locking myself in a room and trying to make myself laugh. For a long time I didn’t know if the show would work because it’s definitely an absurd comedy that doesn’t sit in any one genre. It’s part clown. Part stand up. And a complete hot mess. That being said I’m so freaking excited to be doing it every night at during the fringe!!

What does the rest of 2017 hold in store for Kaitlyn Rogers?
Kaitlyn : After the fringe, a big sleep and recovering from scurvy we’re hitting the road! Next month I’m taking the show to the Melbourne Fringe in September. Then it’s off to the Wonderland festival in Queensland and then who knows! My plan is to keep touring the show until Whoopi Goldberg sees it. Can I Get An Amen?!

You can catch Kaitlyn at the Fringe

One thought on “An Interview with Kaitlyn Rogers”