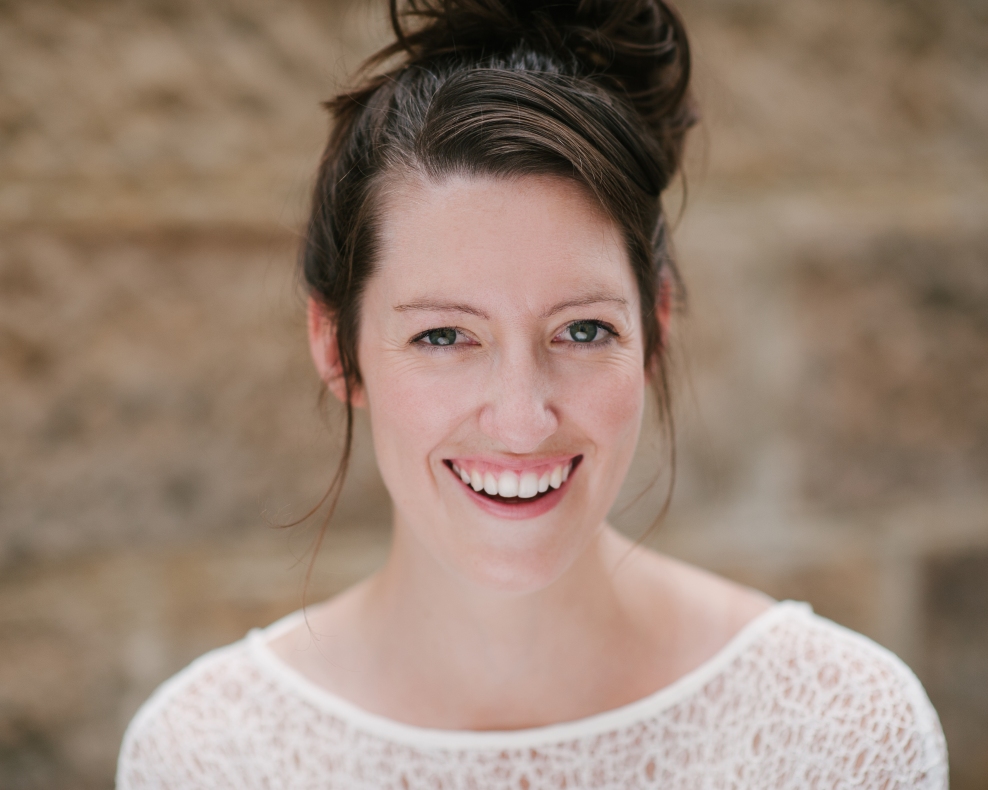 So where ya from & where ya at, geographically speaking?
Born and bred in Sydney I’ve been based in London for the last 8 years. I found myself there by accident to be honest. After finishing two and a half years of acting training in Sydney, I toured the country for a year in a two-hander for high school audiences. When that finished I flew over to the UK for an audition, fell in love with a man and never came home.

When did you first realise you could, well, clown about?
After about 10 years working as an actor and singer on other peoples’ projects, a friend took me to see Peta Lily’s one-woman show, ‘Invocation’, and I was blown away! I was having a drink with her afterwards when she mentioned she was running a clown workshop the following weekend. Never one to run from a challenge I had to check it out! Needless to say I was terrible, but I fell in love with the honesty and vulnerability of the clown. 5 years later I’ve worked with several inspirational comedy directors and teachers, and studied at the Ecole Philippe Gaulier in France. As this is my first solo clown-inspired show, I guess you could say that I’m discovering it as we speak. After all it’s the audience who decides if I’m any good!

What is it about performing live you love the most?
‘Odette!’, has lots of audience interaction which is great fun – you never know what they’re is going to do next! I love that through playing her my natural quirkiness and silliness is amplified, and it’s just brilliant that the audience comes with me into the world of melodrama and American TV glamour. For me, though, the most wonderful things about performing live as Odette are the little games I discover with the audience every night – from the moment I see a sparkle of cheekiness in someone’s eye I know it’s going to be a good show!

What does Marina Margarita like to do when she’s not entertaining the public?
I love travelling! Croatia and Berlin are top of my list of places to go back to and I’m hoping to check out South East Asia and South America next. Another passion of mine is cooking so when I can combine the two I’m in heaven. Throw in summer sun, a jug of Pimms and a picnic blanket and I couldn’t be happier!

You are a graduate of French comedy and theatre school ‘Ecole Philippe Gaulier,’ can you describe the experience of studying at such a famous comedic institution?
‘It was the best of times, it was the worst of times’. Nah, just joking, it was without a doubt one of the best decisions I’ve made. I mean it’s not without its challenges and crises of confidence; Philippe says exactly what he thinks and doesn’t hold back when he’s anything less than impressed, but if you’re training to make it in one of the most competitive industries there is, you want nothing less than the truth right? One of the most frustrating moments for me at the school came in the weeks following 20 minutes of success I’d had in the clowning module. Philippe told me to present that same piece every week until the end of term but no matter how much work I put into it, each week I was met by stony silence – no one found it remotely funny. What had happened? What was I doing differently? Eventually after 3 weeks Philippe forbade me to try that particular number ever again, informing me that ‘you are boring, you push too much’ and ‘you are an unreliable clown’ – devastating! I wasn’t allowed to perform in the week-long clown show at the end of term despite presenting a multitude of new numbers and when he finally agreed to let me on the stage to try a cream pie splat in the face routine….it worked! The class was in stitches! Begrudgingly Philippe accepted me into the line up for the public showing that evening – maybe I wasn’t so terrible after all! 10 minutes later, however, he changed his mind, saying he didn’t ‘trust me to be funny a second time’. And that was that. No clown show for me! Thankfully I came back the following term to study farce and it was a different story – turns out pretty dresses, flamboyant characters and running around in high heels is my thing!

Which clowns have inspired you?
There are so many amazing clowns out there – lots of them at the Edinburgh fringe, lucky us! Lucy Hopkins is a dear friend and very much an inspiration both in life and art. (Powerful Women are About’, 5pm, Heroes @ The Hive) You can’t go past Spencer Jones for good old fashioned silliness. (The Audition’, 6:20pm, Heroes @ Monkey Barrel) I’ve also learned a hell of a lot from watching the legends that are Marny Godden (Marny Godden is One Tooth, 3:45, Heroes @ The Hive), Red Bastard (Lie With Me, 9:30pm, Pleasance Courtyard), and The Establishment (The Establishment: Eton Mess, 5pm, Assembly George Square Theatre).

You are also a dab hand at singing, what are the overlapping artistic sensibilities between the clown & that of the vocal performer?
The idea of the clown is that they’re terrible at everything but say a whole-hearted ‘yes’ to every opportunity that comes their way and then make it up on the spot. It’s been lots of fun finding moments for Odette to sing in the show and playing with the fact that she sings well – a little surprise for the audience every now and again! While both the clown and the singer need to be sensitive and generous to their audience, I love playing with the dichotomy of the singer being a genuine professional and the clown pretending to know what they’re doing despite being absolutely clueless! 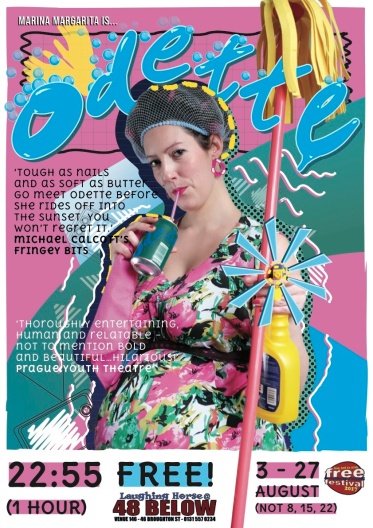 You are bringing your show ‘Odette!’ to the Fringe this August, can you tell us about it?
Clown inspired character comedy, ‘Odette!’ tells the story of a ballsy, brash, heavily pregnant Aussie cleaning lady with big dreams of romance and stardom on cheesy American daytime TV soap ‘The Bold and the Beautiful’. It’s playful and fun, moving in parts, and unashamedly OTT. Oh, and there are a few songs thrown in for good measure!

How did you select your material for Odette?
A mother of 4, my Mum had a lot on her plate when we were kids so Portuguese mother and daughter team, Odette and Erbelina, used to come and clean the house for us every few weeks. When I was first toying with the idea of Odette as a character I recorded several Spanish and Portuguese friends to try and develop a convincing accent but the minute I stepped on stage in character, a broad ocker Aussie voice came out! I’ve had a ball developing the show through trying 10 – 20 minutes at various comedy cabarets across London. She hasn’t always brought the house down, but I’ve kept all the bits that have and woven them into the show at this year’s Edinburgh Fringe.

Can you sum up your show in a single sentence?
Heavily pregnant and hormonal Odette, the Aussie cleaning lady everyone loves to love, floats on soap opera bubbles and shakes her booty to win the heart of super star Ridge at this year’s Edinburgh Fringe.

What does the rest of 2017 hold in store for Marina Margarita?
As soon as I get back to London, I’ll head straight into rehearsal for ‘By Way of Pain’ at the Corby Cube. I’ll be playing Myra Hindley, quite the jump from the silliness of Odettte! 2018 will be a big year for ‘Odette!’ starting off in Bristol in January and then on tour to Australia.

You can catch Marina at the Fringe this month

One thought on “An Interview with Marina Margarita”