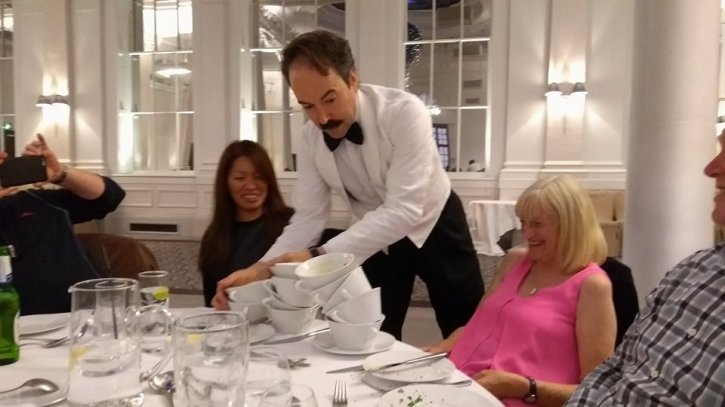 The institution that is Faulty Towers the Dining Experience & its nestling itself into the psyches of the Edinburgh Festival goer was established, it may surprise any, only ten years ago. Ten years before that, the show itself was born, so it was clearly time for a big ‘ol party, & so I found myself in the rather swanky main function hall of the Principal Hotel. Our merry geishas for the evening were Basil & Sibyl Faulty, & Manuel from Barcelona, who like missionaries of the sacred genius of John Cleese bring the Holy Sermon on Torquay Mount to all corners of the globe. I’ve seen Faulty in Edinburgh before, at the rather tuna-jammed B’est Restaurant, but moving the show to the Principal is a stroke of clear genius; the chrysalis has cracked, the jack is out of the box, the spaniel is off its leash, because like a student on a gap year this show suddenly has so much more space in which to weave its magic. The overall content is rather much the same as always, with a couple of new gags tossed into the mix here & there, but what is different is the ambience – its just soooooo much better. I mean it was good before, or at least the idea was good, but when the actors are given a chance to express themselves in such a large & lovely room, with better lighting & acoustics, it really is a pleasure to be there. Indeed, Faulty Towers @ the Principal passed my personal litmus test of quality, for I got lost in the moment & suddenly found myself gawping at the proceedings with an inane grin on my face. 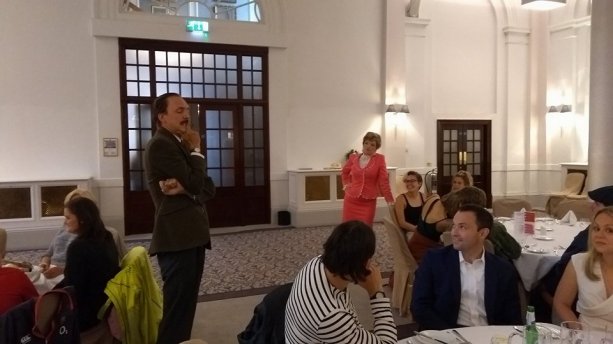 All three of the cast were great, Basil was top notch & Sibyl was just the laugh short of perfection, but it was James Heatlie as bumbling Manuel who especially pulled off a cheeky star turn. In a recent interview with the Mumble, he described the key ingredients to a good show;

I think the main ingredient is the audience, we honestly couldn’t do it without them. Seriously though, the audience are really the collective fourth actor in the room and they really make the show with their wonderful sense of adventure and fun. The other ingredients would have to be the other three actors and then some food to make sense of the title.

The vibe at Faulty Towers is great, in your face but gentle, the food rather tasty, & the circular tables perfectly conducive for generating conversation. Hilariously funny, while at the same time paying a keen homage to one of the all-time comedic great shows, Faulty goes from strength to strength, & when your wife’s knickers end up on Basil Faulty’s head (as did mine in the show we attended) you know you’ve had a good night.