There is a certain young lady out there this Fringe called Marina Margarita, a fast-talking, bizarrely brilliant, ‘cleaning lady number seven’ from Australia who you may see flyering in the Broughton Street area of the New Town in the most unfashionable of attire. I mean, she’s funny before she even opens her mouth, & when she does open her mouth, revealing a set of saintly & exceptionally well-polished teeth, she gets even funnier. Her attractive & colorful rapid patter is like receiving a loose fist beating of a really good masseuse, hitting those tight spots of social anxiety & releasing them all like starlings from a trap. Her command over our comedy pleasure-zones is both instantaneous & continuous & I really don’t have any choice to award her top marks. In a comedy world full of jokes & stand-up comedians who think they’re funny, when they’re clearly not, its refreshing to know that ‘clowning about’ & acting silly has the same effect on we moderns as it did, lets say, Will Sommers had upon Henry VIII. 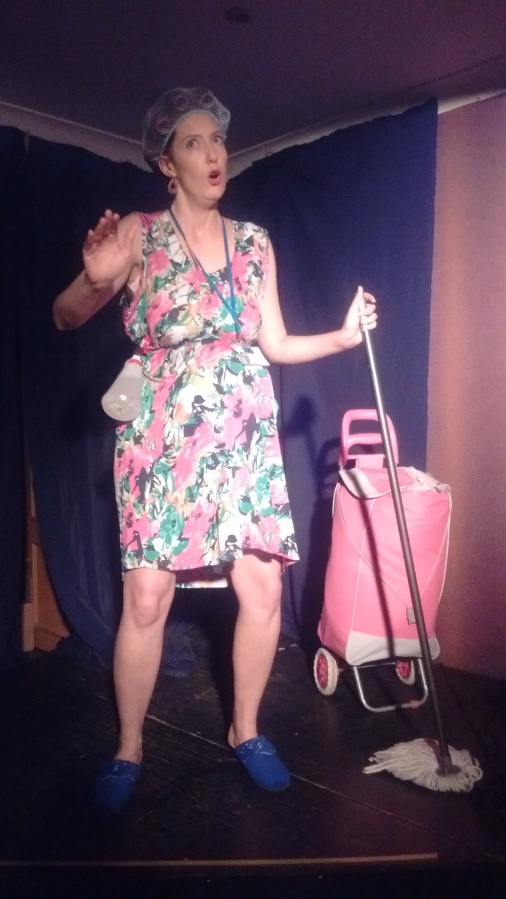 Marina is a brilliant actress, a fantastic singer (tho she uses her sweetly resonating voice quite frugally) & a complete master of the mop, which swept us up into whatever the hell planet her creative genii lives on. In a recent interview with the Mumble, she described her education at the Ecole Philippe Gaulier,  also the origins of Odette;

A mother of 4, my Mum had a lot on her plate when we were kids so Portuguese mother and daughter team, Odette and Erbelina, used to come and clean the house for us every few weeks. When I was first toying with the idea of Odette as a character I recorded several Spanish and Portuguese friends to try and develop a convincing accent but the minute I stepped on stage in character, a broad ocker Aussie voice came out! I’ve had a ball developing the show through trying 10 – 20 minutes at various comedy cabarets across London. She hasn’t always brought the house down, but I’ve kept all the bits that have and woven them into the show at this year’s Edinburgh Fringe.

Her snippets of spellbinding audience interaction work so much better than the vast majority of others. I mean, my wife was involved & had a jolly good time of it. The next morning, I’m like, ‘hey, you should do your own fringe show, it was cool’ – shes like nah, then, ‘y’know, I might have to have a think about it;’ this is the power of Marina Margarita. Her mind has been an ingenious rock-cutter that has found a wee niche in the Mount Comedy corpus, a cave of delights we should all take time to explore. Her creation, Odette, represents a rose-like blossoming of her substantial talents, & for anyone in Edinburgh this month, at the perfect time of night between tiddly & pissed, go see Odette at 48 Below.

One thought on “Odette”