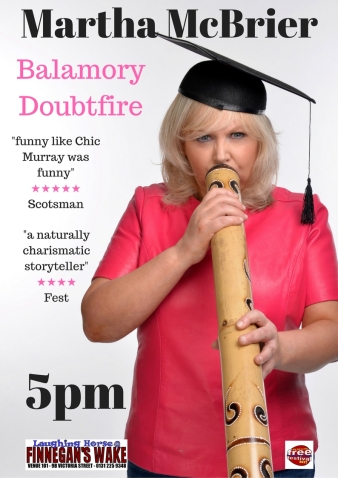 Martha McBrier brings to this year’s Fringe a truly British and up-lifting comedy story. As a U.S. American, I have at times felt excluded from the British jokes I have witnessed, but I found Martha’s jokes to be educational and universal, as an entirely native crowd had the same grand load of laughs as I did.

Martha is a Glaswegian, but has lived in England for many years now. Her perspective on two regions of Great Britain taught me a lot about British culture. Martha’s story starts out with hilarious insights on being a teacher and dealing with bureaucracy. She has a great command of the stage, probably from her time as a college teacher (Martha’s words showed me it means high school in American English). The story takes a serious turn when Martha reveals that she went through some medical problems in the last year and ends with a cheery message about kindness. In a recent interview with The Mumble, Martha gives a brief but comprehensive account of her show as being;

Last year, I nearly died, was the victim of false allegations, tried to stop terrorism, found the man who attacked me years previously, lying in the street, and learned to play the didgeridoo. It’s a show about kindness…

For me, a tourist experience is where you pay money to observe another culture, while an authentic cultural experience is one where you are invited to feel how it is to exist amidst another culture. Martha’s show is an authentic cultural experience. The great thing about such an inviting spirit is that you see a truthful universality in which the vast majority of people want the same thing: to share kindness and also to have a darn good laugh along the way.