Skip to content
HomeMatt Duwell : A Pessimist’s Guide to Being Happy 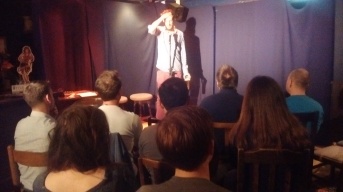 Matt Duwell – pronounced duel – is a lithe gentleman in his 30s with something like a Persian beard quite unlike the one on his poster. What does remain from his poster, however, is the glass of beer, which I actually bought the fellow before he took to the stage,which he kept clutched in his left hand throughout his set in the fashion of an old-styles comedian. Indeed, Matt is a fine example of what is becoming a rare bread at the Fringe, a classic comedian who tells jokes without any gimicks. There is a central theme, of course, which Matt elaborated upon in a recent interview with The Mumble;

It’s a stand up comedy show about how pessimism can sometimes actually help us to be happy and optimism and memes about unbound potential are not necessarily a good thing. It’s also a show that has some crowd interaction and of course a lot of jokes that are quite glib about the world we live in. I’m very proud of the jokes and in many ways, it’s the result of my entire comedy career so far.

Matt’s chief strength is the ability to work an audience; rapid-fire-patter & quick thinking enables him to help us to laugh at ourselves as well as him. There was one stony faced turnip who refused to laugh, & Matt noticed this & just like we tickle our toddlers he was determined to make said turnip laugh – it took a while, but the microsecond the turnip smiled, Matt pounced like a classy jaguar & announced his victory! Another reflection of Matt’s razor-sharp ability is the instance when, a long time after discussing with a couple how they first met, on some website called Hot or Not, near the end of the show he asked the lady her her name.  She replied ‘Lacey,’ & Matt immediately recalled that this was a perfect name for someone on Hot or Not.

Matt has been a permanent resident in Edinburgh just a couple of months now, & his show is the distilled quintessence of his comedy career so far ‘down south‘. Its good, the boy’s got talent, & I look forward already to next year when the Scottish osmosis kicks in & his material begins to be penetrated by living in one of the world’s finest, & windiest, cultural capitals. Of his recent arrival in the city, Matt told us;

It’s amazing and I absolutely love the city and the beautiful surrounding area. Best pubs, great cinemas and theatres, amazing people and plenty of discount supermarkets (I live next to a Lidl/ Iceland combo store!). I even enjoyed visiting Dunfermline. However, I am still not used to having conversations with neighbours that last 20 mins or having the heater on in July, but I’m sure I’ll get used to that. Right!!??