Skip to content
HomeNobody Puts Bibby In The Corner 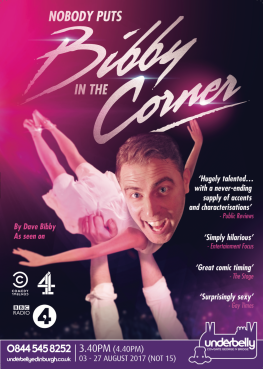 Among the inner ribs of the Royal Mile, the Underbelly has created a black, stylish room which is one of the smartest performance spaces @ the Fringe. Sitting under its sexy black curves I immediately thought of Catwoman, & so I’d like to rename the room in which ‘TVs’ Dave Bibby strut his stuff the ‘Catwoman Cave.’ Moving onto the comedian himself, Mr Bibby is a jovial in the Georgian style, full of witty songs, silly costumes & fun games. His show is what he describes as ‘comedy tapas,’ a bit of everything for everyone, & his highly appreciative audience loved it. In a recent interview with The Mumble, Dave described the personal life-experiences which enters his comedy as being;

Anything that pisses me off. I have a song about the British Press in my current show. The printed media is dying and they’re not being very dignified about it. There’s a lot in my current show about LAD Culture – it’s not so much the lads I have a problem with more the way me, or anyone else in this industry who is from a working class background, is given that label. “How can he possibly play a King in Shakespeare when he spends his weekends drinking lager and watching football?”. By acting, go fuck yourself.

His routine is a dragonfly mix of stories, songs & fun times, & for me there were three stand out moments. The first is his playing of the British ‘lad’ to perfection, & in the process has invented a banter game in which people have to ‘hit the tit’ (a metal bell thing) when they guess the right answer… i.e. when Santa Claus becomes Banter Claus. One of the simplest & best comedy games I’ve ever seen at the Fringe, & I was cheering my head off every time someone got one right – both sides!  The other two highlights were an onscreen expose on the trolling he’d received after being on telly – self-deprecating brilliance – & his finale song about the tabloid press, a medley of eye-opening & satirical wonder. Dave Bibby is a one-man pantomime with an unpretentious desire to entertain first us, then himself. A guaranteed hour of mirthful hijinks!