Samantha Pressdee is a cherub-cheeked enigma. A sweet lass from the Black Country who finds herself in Edinburgh via a mad stint in London as a feminist & anarchist of some repute. Passionately anti-establishment & honest to her core, she has decided to channel her political identity through the medium of stand-up comedy. Political comedy is usually satirical, concentrating on the sexual misdemeanors of our MPs & the suchlike, but Samantha’s muse is that of benefits Britain, not in the sickeningly voyeuristic reality shows that disgrace our TV screens from time to time, but that of the London squatter scene & her place in that vibrant theatre of life. In a recent interview with The Mumble, Sam elaborated upon her status as an anarcha-feminist comic;

I think confrontation can create comedy, or just enemies. Confrontation with bare breasts is very funny, but also very serious. We are serious comedians. I was actually a comedian before I became an anarcha-feminist, before I was just ‘a feminist’ but I had to separate myself from the ones who hate men and sex positive women. Anarchy is about challenging hierarchy, feminism is about challenging patriarchy. So it makes sense that feminism shouldn’t turn into a matriarchy. We need equal ground! 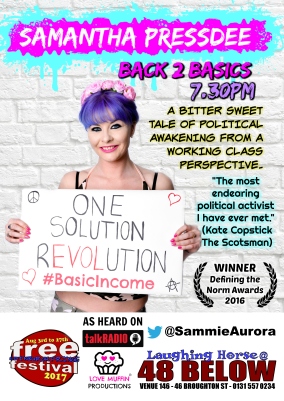 Samantha sets off as a comedian, full of child-like innocence in her deadpan delivery, but it is not long before we enter her main theme & the comedy is replaced by a self-therapeutic dissertation on her life as an activist. She brings us battles with bailiffs, encounters with Russell Brand & heroin addiction among other set-pieces, her words occasionally backed up by video clips on a big telly. There is also high emotion from the lass as she reaches the end of her show, & on the occasion I saw she could hardly hold back the tears. Her creation is a curious hybrid, where nostalgic reminiscences are laced with intermittent gags & savage attacks upon the patriarchy. Quite the roulette wheel, her material sometimes lands on a funny number, & sometimes not, & as the show progresses the funny numbers came up less & less. But Back to Basics is no ordinary Fringe Show, & for that I applaud her. It is definitely an experience to spend an hour with Samantha, one that transcends the often silly banality of the mainstream Fringe.