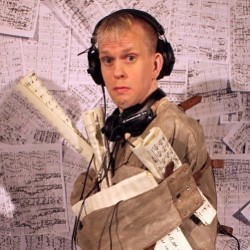 Now and then you see something so original and unexpected you will never see things the same way again. This is one such show. Right from even before the show starts when we are serenaded in our seats by the cheesy keyboard stylings of a song who’s only lyric is “Waiting for the show to start” you know you could be in for a treat. Then when an anemic, awkward, googly eyed creature with a Tin Tin  haircut walks on to the stage and starts apologizing for the show before it’s even begun you know it could go either way. And, truth be told by the audience reaction, it went both. Either stunned into confused, uneasy silence, storming off in disgust or beaming and cackling with delight. Thankfully I fell into the later category and frankly see it as a damning condemnation of humanity to react any other way. What was not to love?

The music itself was a monumental achievement. Almost an hour of uninterrupted ebbing and flowing of Gershwin like melodies done through your little brothers shitty Yamaha PSR keyboard. Endless musical motifs, references and jokes. And jokes there were so many. Like the airplane films if there was one you didn’t find funny now there was bound to be one coming up that you’d find hilarious. Or as in much of this show’s humor, one you’d be clever enough to understand. And this was one of the beauties of the show. There was absolutely no attempt to dumb it down for a mass audience. And in these days of emojies, made in Chelsea and Donald Trump that is certainly a refreshing change. Lyrically he was outstanding. To be quite honest I don’t think I’ve ever heard wittier or better constructed comedy lyrics anywhere. One song was literally just all the expressions for being gay – but they all rhymed! And that’s just the tip of the iceberg.

A gay, autistic bulimic man singing a comedy opera about his time spent in prison and mental breakdown may not be to everyone’s taste but it damn well should be. Outsiders are often the only real voice out there and that’s why everyone should listen to them but then, if they did, I guess they wouldn’t be outsiders anymore. That being said Robert White should be the biggest comedy star on TV today. He is like no-one else before and I expect since. He should be hosting the panel shows and participating as all the contestants. Step aside Jimmy Carr, your time is (thankfully) up. And you can’t even play a decent trumpet! So remember this name – Robert White. If there is any justice in the world the star of tomorrow. Just come and see the show I implore you. You may love it, you may hate it, but whatever happens you’ll remember it. And isn’t that the important thing? Like Lars Von Trier said – “Great art should be like a stone in the shoe” and Robert White is a fucking great Boulder.