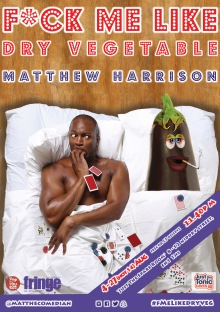 F*ck Me Like Dry vegetable is an intriguing title for a comedy show and I had no idea what to expect from the hour as the message came out from Mumble HQ. In the end it turned out to be a late night stand -up comedian named Matthew Harrison, who in a recent interview with The Mumble,describes his show as being;

About my many many years as a croupier in a London casino. I give the audience an insight into what really goes on inside a gamblers paradise and I don’t hold back. I thought of a few other names prior to this one. First was ‘Matthew Harrison Everyday I’m shuffling’ which had a nice ring to it. Then I thought of ‘The King Of Spades’ obviously a double entendre. Funnily enough the term spade (for a black person) wasn’t in use that much anymore. So basically because people became less racist, it ruined that title. So then I went with ‘F*ck Me Like Dry Vegetable’.

Matthew is a good performer & has a unique story to tell, giving us hilarious insights into what it was like working with gamblers. During the show we also learn the meaning of the title, while Matthew tosses vegetables into the crowd. He talked, too briefly I felt, about the addiction many gamblers are facing. He also brushed lightly into racism, making just some simple laughs out of it. With these serious topics, I thought Matthew could have given us more emotive comedy, & my heart was straining for him to do it – but Matthew & his material this Fringe are in too frivolous a mood. Still, what Matthew does give us is pretty damn funny and a good time rushes into the room the moment he steps onto the stage. All in all a grand effort, but with Matthew’s talent and experience, the final product could be have been a tad better.