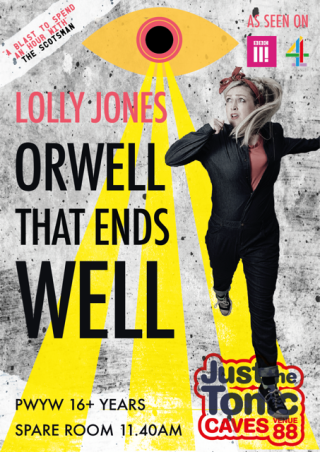 Just the Tonic at the Caves
Every day 11.40am Until August 27th

Being a huge fan of Orwell’s work, in particular 1984, I was quite looking forward to this show. I was expecting some kind of theatrical satire or the such like, but instead what I got was a rather hyperactive young lady telling us all about her experience on reality TV show “Hunted” and the surveillance state we live in. Having previously lived with a fairly dedicated conspiracy theorist, a lot of this was well trodden territory for me. The only difference being that ten years ago this was all conspiracy theories and now it’s reality. The irony of it being of course that the very medium through which most conspiracy theorists get their information, i.e. the internet, is the very medium the “Powers that be” or “Big Brother” are monitoring our every move through. Which is, of course, how they managed to capture Lolly (the star of the show) on a muddy track in Essex. And later, without spoiling it for you, how she had a particularly fortuitous encounter with Jeremy Corbin.

As a piece of narration it was all a bit of a ramble. Veering off at all kinds of tangents with no clear narrative thread. But their was a lot of very frightening, and amusing, information thrown at us which the audience seemed to be largely gobbling up with great enthusiasm. The irony of internet surveillance was not lost on her either, and she confessed she could not live without it and only one person in the audience disagreed. But we did live without it. And it was less than twenty years ago. I remember! We got along just fine. We still had friends, we still went on dates and we still made plans that worked. Remember the meeting point at Glastonbury? It never failed! Anyway, not to sound like a Luddite but I believe the internet may be responsible for more evil than good. And Lolly, despite her confession of being lost without it, seemed to agree.

Back to the show and I have to say that Lolly was an energetic and engaging performer and the audience seemed to be lapping it up. It was certainly hitting all the right zeitgeist buttons and was very well researched. I just personally left feeling a little cold by the whole experience. And bombarded with facts. Maybe I’m a little too slow, or after three years living with a conspiracy theorist I’m a little tired of dystopian prophecies. As for Lolly, I advise not going on a show where you are giving full access to a bunch of strangers for your entire internet history and then complaining about the consequences. But then, as the show states, there’s a good chance that’s happening to us all all ready. So maybe we are ALL doomed.