Andy Onions, what a guy, what a comic! He’s coming to Edinburgh, thank the gods, & the Mumble were lucky to catch him for a wee blether…

Hello Andy, so where ya from and where ya at, geographically speaking?
Andy: I was born in Oniontown, a district of New York. Or perhaps it was Aylesbury, UK. I am half British, half Iranian and half Onion

When did you first realise you could make people laugh?
Andy: I was watching some of my friends in a school football match. A few minutes in, I wasn’t paying attention and a waywood shot missed the old Onion bag and hit me square in the <ahem> Onion sack. Ridiculously hard. From point blank range. It was soo painful. Apparently I went down like I had been shot. I’m there, writhing in agony and they had to stop the game for a full minute as both teams AND THE REF were doubled up in laughter. One of my friends told me that when he was getting therapy over a bad breakup, he was told to think of a happy place that brought him nothing but joy and that was the first thing that came to his mind over a decade later.

Which comedians inspire you, both old skool and on the scene today?
Andy: Bec Hill – Amazing comic. You just feel sooooo good after watching her shows. Check her on youtube or see her live. Ronnie Barker – What a talent. Eddie Izzard – My first stand up love. Dave Gorman – He pioneered the genre I work in. A legend. I’d like to think he’d enjoy PowerPointless for the sheer sillyness of it. I have been compared to Dave Gorman crossed with Banzai which was a lovely complement. Rob Broderick – Go see him at the Udderbelly Sooo funny! Spencer Jones – So silly! 🙂 For quick wittedness; Frank Skinner Paul Merton. And finally, James Acaster & Stuart Lee for breaking the rules.

How did you get into stand up?
Andy: I did a best man’s speech at a wedding. A speech I did for the stag do went brilliantly, so I was a little overcocky. At the wedding the “audience” were all 30ft back from me in a massive room in the daylight. I was nervous so I had had too many beers. It went terribly. I compared the Groom’s Dad to Santa Claus as he had a massive white beard for years but for the big day he had shaved it off. I kept the joke in. Got nothing. I ended up improvising about Tony Blair and something about the Iraq war, messed up my final punchline, dropped the mic (literally) at the end and it made the comedy whistling noise and I walked off to no applause. Strangely, I was hooked.

You’ve got three famous figures from history coming round for dinner. Who would they be & what would you cook; starter, mains & dessert?
Andy: If I was to invite three famous figures from history, they wouldn’t come as they are dead. I’ll have a three course meal to myself Starter: Onion Soup / Main course: Onion Tart with an Onion Bhaji / Pudd: Caramelized Onion Ice Cream

Can you tell us about Freedom Fridge?
Andy: It’s a super friendly comedy night in a relaxed pub in Kentish Town, London. We allow everyone and all acts, and mix it up with some newbies and some with more experience. We have acts doing their first ever gig on the same night as the Perrier (or whatever it is) Edinburgh Newcomer or people who have been on Letterman. Everyone is welcome and best of all it’s 100% free.

What are the differences between a good comedy MC & a bad one?
Andy: Ha, this is something you learn as you progress. An MC is like the rudder of a boat, sometimes they need to steer, sometimes they need to do very little once you are going. It’s all about the boat not the rudder. When I started, I used to do loads of material. I now rarely do any actual material. I have learnt over the years that it is about building and maintaining a platform for the other comics to shine whilst making the audience feeling ready to laugh. I get them used to making noise as people are often coming from work or something where we have to keep ourselves in check. An MC needs to bring out the potential in every audience member to make them ready to laugh. The comics need to actually make them laugh, but their job is easier if the MC has got everyone in the mood for some fun. An MC also needs to keep to time and make sure the night runs smoothly. If an act is good, perhaps roll the next one on. If someone is has a great set bring the level back down. Go on. Don’t even try and be funny (This is hard as it goes against every instinct. If you have to make a joke, make it a cheesy deliberately bad one). Reset the crowd for the next act. If someone doesn’t have the best set, re-energize the crowd without referencing the fact the last act didn’t do so well, build a positive vibe. And don’t stay on stage too long. Also, a great MC will check the room out before to make sure they have sightlines and can visualize the room, plus ensure that the audience and they acts are lit correctly. There’s not often a stage manager so it is often the MCs job to set the room up as they need. I also run sound at the freedom fridge, so I try and make the next song refer to something the last act said. Wifi and a laptop makes this easier and it’s a nice touch where people go “Ahhhh” which adds a touch 🙂

You’ll be bringing your show, PowerPointless, to the Edinburgh Fringe, can you tell us about it?
Andy: PowerPointless is the stupidest PowerPoint Presentation you’ve ever seen. It’s really silly and light-hearted (It’s 12+) and has lots of fun animation and sound and some singalong bits, some video games and some nonsense. I’ve put in over 250 hours into the slides alone!

What is it about performing at the Fringe you love the most?
Andy: The city is great, locals and tourists mixing, you can see 5 shows a day or chill in a pub then walk up Arthur’s seat. I know so many people here and there’s so much to see. It’s the world cup of comedy!

You’ve got 20 seconds to sell the show to somebody in the street, what would you say?
Andy: Hi there, do you like intelligent comedy? Well this is stupid comedy! If you want to see the best show of the Fringe, DO NOT SEE MY SHOW, see Rob Broderick at the Udderbelly. If you want to see a show that moves you emotionally, DO NOT SEE MY SHOW, nobody dies and I have a great relationship with my parents. If you want to see a stupid man in Hawaiian shirt with a big screen run around with computer games and singalongs and super happy fun times. Maybe this is for you 🙂 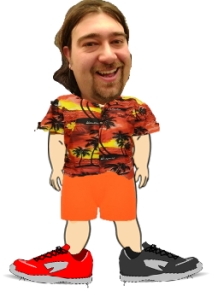