Soho Theatre Young Company’s most elegant performer is bringing his second super-silly absurdist show to the Fringe. The Mumble caught up with him for a wee blether…

Hello Jacob, so where ya from and where ya at, geographically speaking?
Jacob: I’m from one of the many dullard suburban towns that orbit our beutiful cesspit of a capital. Like a lot of those places, they cover up their tedium with a veneer of respectability, so there are 3 branches of Greggs in a single mile of high street, but one of them has an outdoor seating area.

When did you first realise you could make people laugh?
Jacob: I’ve been making people laugh as a defence mechanism for ages. Although, just like with stand up comedy I wasn’t great at it at first. I remember that for a long time kids at school genuinely thought I really believed that I could shit brie, because they hadn’t realised that I’d discovered sarcasm at age 6. 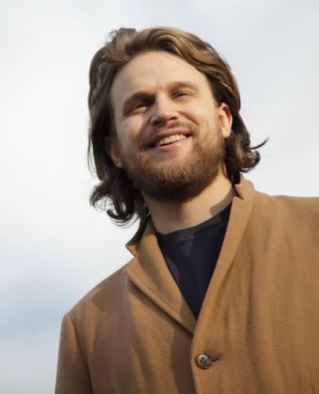 Upon which life-experiences do you draw your own comedy?
Jacob: For me it’s mostly childhood. I had an odd childhood in that, despite being culturally middle class – my parents are undoubtedly middle class – due to various reasons that i won’t go into here I spent most of my childhood seriously poor and constantly on the edge of potential ruin/losing the house. Like a lot of kids I escaped into fantasy and books and well, here we are.

What is it about performing live you love the most?
Jacob: Comedy is the crack cocaine of arts. It has an instant hit and the highs are extremeley high. On the other hand, the lows are extremely low. I love that I can write something on my lunch break and work and perform it that evening. It keeps you on your toes constantly. People change, funny changes, everything changes and you have to keep producing new things.

Can you tell us about Soho Theatre Young Company?
Jacob: It’s an incubator for exciting young comic and theatrical artists in London. The best thing about it is, unlike a lot of comedy workshops which encourage a certain style of joketelling, they want you to develop yourself in your own way. Some brilliant new talents have come out of SYC including Olga Koch, Huge Davies and Jack Rooke.

What does Jacob Hatton like to do when he’s not being funny?
Jacob: I’m a bit of a raver so I enjoy “dancing” (throwing myself about a field/room/hovel) to electronic pips and squeaks. I also love reading and writing stories about aliens, wizards and heroism.

You’ve got three famous figures from history coming round for dinner. Who would they be & what would you cook; starter, mains & dessert?
Jacob: Absolutely no way am I cooking for any corpses. If Napoleon’s mouldering skeleton, or Rameses II is coming round for dinner I’m making soup and soup only just so I can see it pour through the holes in their skeleton and get the mummy bandages all wet.

Can you describe in a single sentence the experience of performing at the Fringe?
Jacob: Emotional turmoil.

How have you changed as a comedian since your first Fringe in 2016?
Jacob: I’m 1000 times more confident but also a lot more cynical about the whole thing. I went into Edinburgh 2016 wide-eyed and optimistic. Now I’m more like a jaded corrupt cop on the narcotics beat, taking the bribes and hoping he doesn’t get shot before retirement. 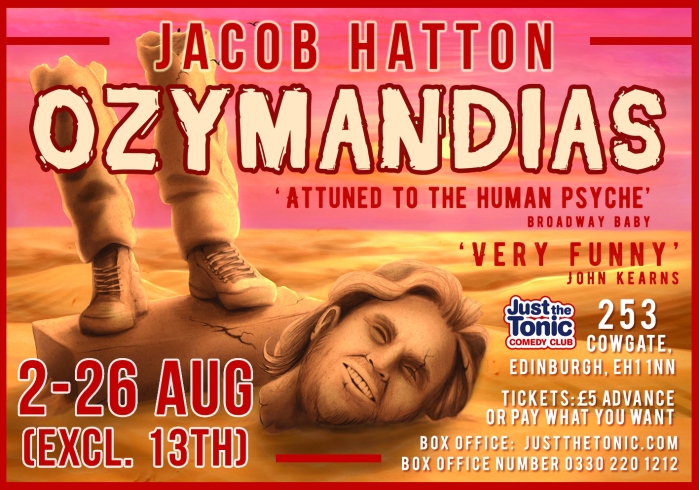 You’re bringing ‘Ozymandias’ to this year’s Fringe. Can you tell us about it?
Jacob: “Look upon my works, ye mighty and despair!” Ozymandias is based on our endless desire to be GREAT, to want people to know us and know about us. It explores what that means, why we want it and why ultimately, it’s a profoundly useless thing to really want from life.

How does the music incorporate itself into the show & where does it come from?
Jacob: I’ve got a friend who is a fantastic composer who’s composed some music for the show – but you need to come and see it to see that.

You’ve got 20 seconds to sell the show to somebody in the street, what would you say?
Jacob: “Epic Comedy for Kings! Also it’s raining and the morning so why not have a cup of tea and let me cheer you up for a fiver or less eh?”

What will you be doing after the Fringe?
Jacob: Ditching the financial, emotional and administrative nightmare of comedy for the small matter of organising my own wedding haha

Just the Tonic @ The Caves