One of Britain’s favorite radio shows, Fun Kids, is coming to the Fringe. The Mumble managed a wee a blether with the brilliant Bex Lindsay…

Hello Bex, so where ya from and where ya at, geographically speaking?
Bex: Oh hi there! I’m originally from a tiny northern village called Wall (it’s real, I promise) but now I’m down in London.

When did you first realise you could make people laugh?
Bex: I would ‘make’ TV gameshows for my family in our living room, and force them to take part or watch. In retrospect, I suspect their laughter was more out of nervousness than genuine joy.

How did you get into Comedy?
Bex: I’ve always had a geeky love of comedy- everything from the 50s to now- but the first time I went to the Edinburgh Festival was when it really clicked with me how great live comedy could be. Then some Uni friends put a sketch group together- The Beta Males- and I would help them out backstage because I loved the atmosphere of comedy gigs.

What is it about performing live you love the most?
Bex: We’ve hosted at loads of family festivals with Fun Kids and my favourite thing is the audience- the kids themselves. They’re funny, always ready to join in, and brutally honest. If they don’t like something, you absolutely know about it. One kid in a preview refused to give me a hi-five because he didn’t like a joke I’d just told.

What do you like to do when you’re not around comedy?
Bex: I want to say something noble and impressive, like charity skydives or epic marathons, but it’s mostly going to music gigs, watching The Crown, and eating chocolate.

You’ve got three famous figures from history coming round for dinner. Who would they be & what would you cook; starter, mains & dessert?
Bex: Edward VII, because from what I’ve read about him he was a bit of a rogue but would be very fun at a dinner party. Barbara Castle, because she was a fearless MP who I reckon would have razor-sharp party chat. And Kermit the Frog- is he allowed? I think he’d be one of those friends you could plonk with anyone and they’d get on immediately. I’d cook what I do for anyone who comes around- three courses of pie. Mini pork pie to start, fish pie for main, banoffee pie for dessert. It’s what my friends affectionately call ‘The Bex Special’.

How, when & where was ‘Fun Kids’ created?
Bex: Fun Kids was created in 2005, and originally only available on DAB in London. But the station has grown loads since then; now we’re available nationally! Which is nice, because it means my family can tune in (and often message me to let me know what they think of my show..!)

What is your role?
Bex: I’m the Drivetime presenter (although for our audience, it’s more ‘homeworktime’) between 4-7pm in the week. I also host our Book Club Podcast, and get to chat to loads of celebrity guests. 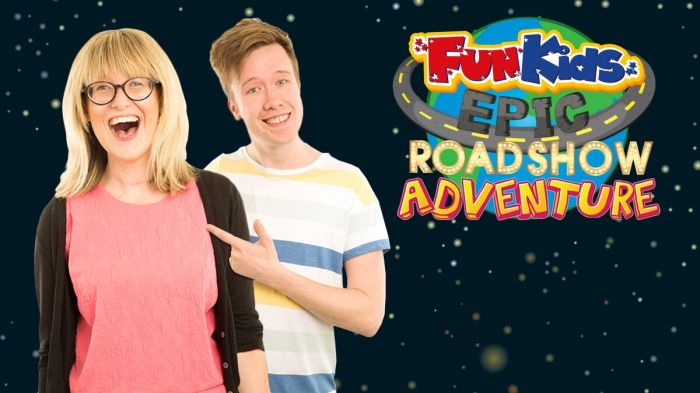 You are bringing Fun Kids to the Fringe as a show. How has the transition to the stage been going?
Bex: It’s been great! And scary! At the same time! This is a totally new venture for us; we’ve never done a full hour show before. We decided to really use the fact we’re a children’s radio station, and have some fun with it. The idea is we need the kids to help us stay on air and keep our jobs, so we get the audience to join in making the news, playing games, and even doing some interviews for us.

Can you describe your working relationship with Dan Simpson in a single word?
Bex: Honest.

You are something of an Edinburgh veteran – what advice could you give to somebody performing at the Fringe for the first time?
Bex: Well, although I’ve teached and helped out at loads of shows over the last few years, this is my first time performing too! From my experience, the best way of getting through is pacing yourself- the Fringe is a marathon. It’s hard to have a night in when you’re living in the middle of the world’s best arts festival, but sometimes you need to take some time out.

You’ve got 20 seconds to sell the show to somebody in the street, what would you say?
Bex: To kids: Want a show where you get to mess around on stage, win prizes, and potentially take the mickey out of your parents? Then come to our radio roadshow! To parents: Want a show to keep your kids entertained for an hour while you sit in a dark room and try to recover from the night before? Then come to our radio roadshow!

What will Bex Lindsay & Fun Kids be doing after the Fringe?
Bex: I will be immediately escaping to see my Dad in Wall, a village which has the same population as just one block of flats on Nicolson Street. Fun Kids will carry on being the best (and only!) radio station for kids in the UK, and perhaps plan a London run of the Edinburgh show…