Nicky Wilkson, one half of the acclaimed duo, The Kagools, stands like Bob Dylan in his Subterranean Homesick Blues video, flicking through a white pad on which are written the things which make her happy. As we join her lovely dream, Nicky makes everyone feel cool & inclusive, & is not shy with the free pork pies. We play game shows such as the fairly insane mechanics behind Pass the Bingo & also Hanky Panky, which is not as sexy as it sounds. She also plays the spoons extraordinarily well, & the general vibe is one of watching Biggles in biplane strafing the audience with her cheeky parlour room funathon. In this instance, Nicky is a children’s entertainer for adults & no-one left the room without their fun levels topped up for the day. 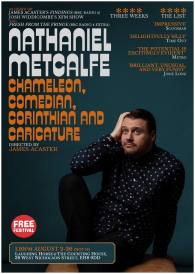 Nathaniel Metcalfe is making his comeback. Four years ago, in the flushes of comedy success, his girlfriend dumped him on the last day of the Fringe. ‘At least my bags were packed,’ he quips, but this is no lament for lost love, for the fellow is clearly over the trauma & is ready to rock once more. As a comedian, the sensitive Metcalfe reminds me of a swan gliding effortlessly through his material. There are funny gags, there is clever nostalgia, there is self-deprecation, there is a Jeremy Irons video & there is a bell rang by the celebrated James Macaster, Metcalfe’s wingman, whenever our comedian goes off tangent. A pleasant session is this, an early & tasty appetizer for a full day at the Fringe.

Kevin Matviw is from Canada, & is also a very brave man. Composing & performing a solo sketch show is a difficult artform, yet he does it so enthusiastically well! As he adds sound effects triggered by a foot pedal, Kevin invites the audience in on most occasions. It is rare that everyone wants to get up & make a fool of themselves during a show, but it felt like everyone in the audience were chomping at the bit to get involved. Self Defence For Cowards rolls thro’ multiple set pieces of various levels absurdity, the highlight of which was his 70s cop show, in which audience member Terry played an even more enthusiastic part. This is a perfect show for a few pals or a family who want to sit down together in a more relaxed frame of mind than having to listen to a soliloquizing comedian of random quality. Kevin has quality &, in the current climate, a quite unique show which is well worth a watch. 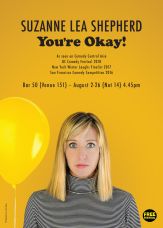 For those who want to feel a proper part of the international comedy community, then go see Suzanne Lea Shepherd, who brings her distinctly American-toned material to Edinburgh. Audience friendly from the off, the central slam-dunk theme of her solo show is one wild family Thanksgiving, drunk on boxed wine in a strip-club with her parents, from which her epic & witty observations digress. We are also entertained by the grand scheme of relationships & her place in it – sometimes with an awkward viscerality – but definitely true to life & clearly true to herself. Both brutal & affectionate, Suzanne is a heady cocktail of  humor & storytelling, & at a concisely-timed forty-five minutes, You’re Okay! is an excellent way to spend your freestylin’ day.

If there’s one thing you can guarantee every Fringe, its Nathan Cassidy coming up with a completely fresh show, so fertile is his comedy imagination. This year we have a pinballing blast through his year’ of working as a banker, where one loose comment might have unleashed the great financial crash of 2008. Looking snappy as a gigolo, his suave rock’n’roll comedy persona beams us through his worldscape with unforgettable energy. Satirical, sarcastic, cunning & clever, Cassidy is a different animal to most comedians in Edinburgh right now, a perfectly intellectual & above all funny antidote to some of the nonsense being babbled all day across Edinburgh.