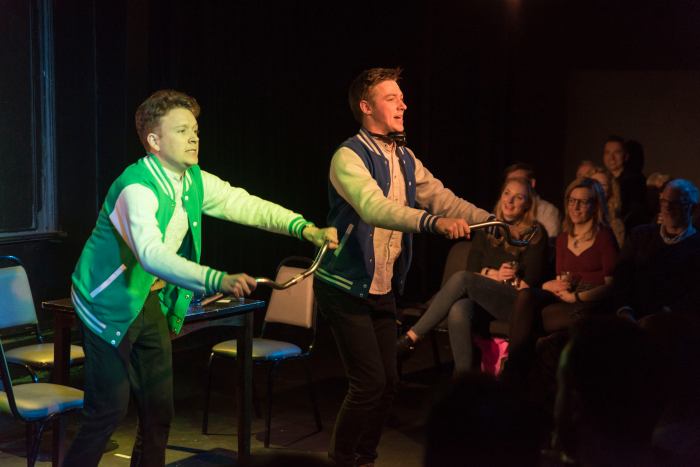 Jacob Lovick and Tyler Harding are back at the Fringe with their third slice of  maverick mayhem. The Mumble loved having a wee blether with the boys…

Hello Jacob, so where are you both from and where ya at, geographically speaking?
Jacob: Hello! I’ve lived a very adventurous life, in which I was born in London, grew up in London, lived briefly in Birmingham for a period of my life I like to call ‘being at university’, and then moved back to London, where I’m currently still living. In London. Tyler has been slightly more maverick. He’s from Stroud, a Gloucestershire town about as opposite from London as you can get in every conceivable sense. He’s just moved from Birmingham to London too, to be “nearer to me” and “mostly for his job”. What a guy.

Hello Tyler, so how did you & Jacob meet?
Tyler: First year of University. I’d heard rumour that there was a man with an exceptional handshake on my course. Being a massive fan of good handshakes, I sought to find him. And yes, he absolutely does have a fantastic handshake.

Which comedians inspire you, both old skool and on the scene today?
Tyler: I like the double acts that push each other and play with each other – stuff like Peter Cooke and Dudley Moore, or Rik Mayall and Ade Edmondson, people who make it their aim to make the other laugh or just enjoy it fresh every time, they’re fantastic. On the scene today, Im absolutely in love with Max and Ivan. Truly, truly brilliant.

When did you first realise you could make people laugh?
Jacob: When I was in year 5, there was a guy who had just the best laugh in the world. I won’t mention his name, on the off-chance that he ends up reading this and hasn’t laughed since year 5. It was so, so compelling to try to make him laugh, which would then set other people off and so on. That’s probably still at the heart of it now,

How did you get into comedy?
Jacob: Bafflingly, my school ran a stand-up night. Once. Just once. For good reason. I entered it and did 10 wilfully poorly-judged minutes about wanting to be a DJ. Aged 15. I don’t think I knew what a DJ was. But it must have been an enjoyable enough night because I carried on doing it right through to university and now beyond. Fellow comedians Chris Martin, Rory O’Keeffe and Alexander Fox were all also on the same bill.

Can you describe you relations with Tyler in a single word?
Jacob: Terse.

Can you describe you relations with Jacob in a single word?
Tyler: Yes

What are the key ingredients to a good joke?
Tyler: I absolutely fall about for any kind of surprise in a joke – a ‘pull back and reveal’ or ‘bait and switch’, so for me, that’s what cracks me up.

Just what exactly is LoveHard?
Jacob: It’s a not-at-all sexy fusion of our two surnames and our two sets of opinions about what is funny. It’s two people’s attempts at a foray into comic stories and adventures, and an opportunity for us to live out our dreams of being in the sorts of shows that we create. It’s sort of a sketch show, sort of a play, but mostly just an hour in the day when Tyler and I can spend time together not talking about ourselves. 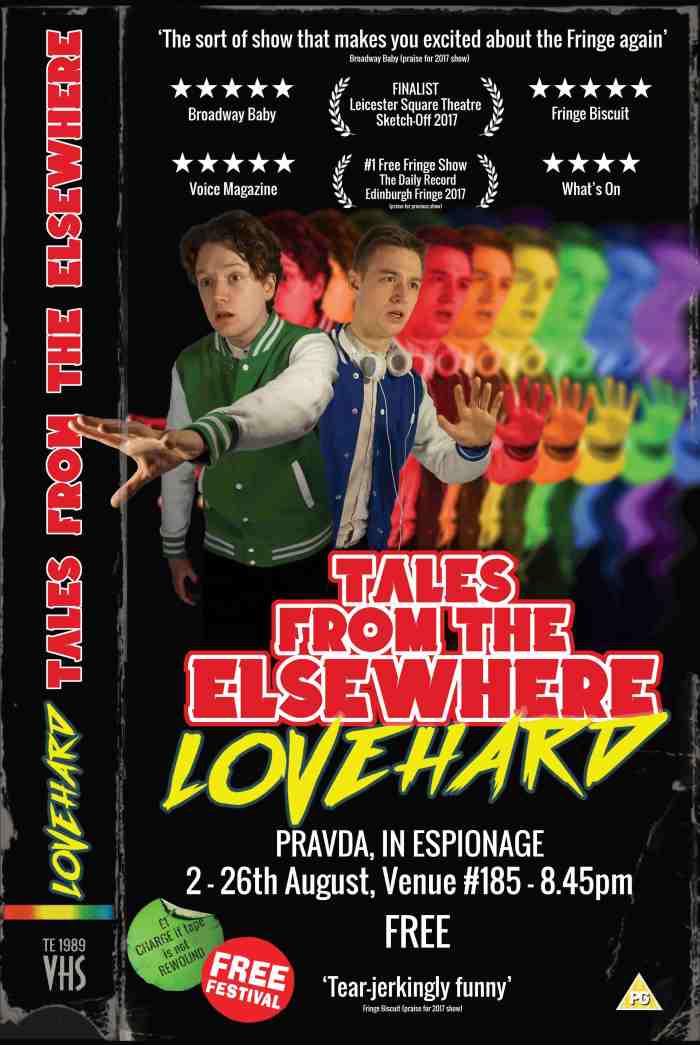 Can you tell us about your run at the Soho Theatre?
Jacob: We were lucky that our show last year, ‘Murdered by Murder’, went really well and had some lovely five star reviews, most of which were from people we didn’t know. Lee Griffiths from the Soho came and saw us, enjoyed us and programmed us as part of their Soho Rising season at the end of October, for new and undiscovered acts. God it was fun. We didn’t tell them we had a gun in the show (which was made of plastic and marked ‘TOY GUN’), which had to be kept in a locked room at all times, and we forgot to invite any agents or producers. I got overexcited at the start and almost gave away a major plot point. I don’t think we’ve ever been more proud.

This is your third year at the Fringe, what have you learnt about yourselves & your act since 2016?
Tyler: I think the biggest thing I’ve learned is that our show isn’t and never was simply a sketch show – our first year it was also a genuine haunted house horror, last year was a murder mystery, and this year’s also an 80s Sci Fi Thriller – so I shouldn’t just be worrying about laughs. It’s ok to have slower moments, to have tense bits, and it’s ok to let the audience enjoy that but without trying to cram on making it funny. If we do, it’ll take away from the rest of the story.

Can you describe in a single sentence the experience of performing at the Fringe?
Jacob: A self-indulgent, over-expensive, mentally-disempowering, under-prepared, hot-bin-scented best month of the year.

You’ve got 20 seconds to sell the show to somebody in the street…
Tyler: We’ve got an 80s Sci-Fi Thriller Comedy. It’s like Stranger Things, Jumanji and The Goonies had a baby. With just two performers playing about 50 characters.

Tales From The Elsewhere 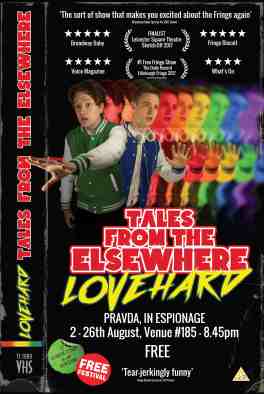