Novotel is a great hotel – I’ve stayed there with the wife a couple of times, & they really do make for comfortable stay. They have now opened their doors & their conference rooms to the eternally expanding Fringe, & a great addition it is too. But enough of the venue, what about the comedian? Well, her name is Sonia – Sonia Aste – a soft-spoken yet energy-streaking Spanish lady with a lovely American twang. I got it straight away what kind of comedian she was – the quintessential internationalist. The audience was a microcosm of Europe; the Irish, Germans, British & of course Spanish were all represented. It reminded me very much of a British game show called Going For Gold which was on air between 1987-1996, presented by an Irishman called Henry Kelly. The questions were fairly difficult, & I always thought it unfair that people from the continent had to answer questions in English, it was a bit weird. But the Global Village is putting down roots at a phenomenal rate, & English is now the international lingua franca, with Sonia Aste personifying the spirit. 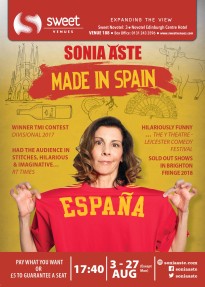 With Spain being one of the top destination for British tourists, my show shines a light into our cultural differences and what it means to be ‘Made in Spain’. It’s a fast paced show based on a ‘Tapas Menu’, and the audience chooses what they want to order. I wanted to cater to all comedy tastes and like a good Spanish meal, provide a space to share in the fun and laughter.
Read the full interview

The essence of her show is to sprinkle a bit of Spanish sunshine on us all, looking at swirling life situations, & giving us the Spanish take on them. To the audience were handed out a set of maracas, a tamborine & something that looked a giant ribb’d wooden suppository, apparently called a güiro. These were then shook & shimmer’d at the appropriate moments between Aste’s bubblebath performance. I also experienced a new moment in all my Fringeing; Aste was pronouncing a phrase she had heard in Spanish, to which the Spaniards in the audience were laughing before it was translated into English. It was at that point that I realised Sonia’s informal, communicative spirit is the perfect anti-Brexit peace-cry – we Europeans are all the same really, & watching a re-run of Going For Gold or heading to the Novotel in Edinburgh this Fringe at 5.40PM will prove that.