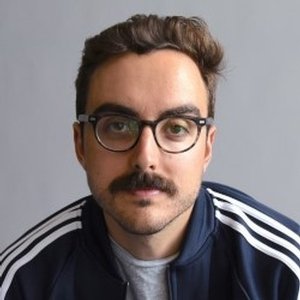 Daniel Muggleton appears on stage like some Alexandrine statue, Callimachus perhaps, & beacause of the smart confidence to his delivery emits the same sagely energy. He is an Australian living in London, & this is his third Fringe in a row. Daniel has a really easy vibe, & at the commencement of his show, as he chatted with every party in the room, he reminded me of a recycling truck which visits the street house-by-house, emptying the blue & red plastic boxes of all that Fringe junk, & leaving our mental vestibules fresh for more comedy.

Mr Muggleton is no cavalry charger, but as his libertine mind gondaliers through his material, he does appear happiest taking the subtle piss out of anyone & anything, including himself. Along the way we are treated to a contemporizing tour of his personal zeitgeist; Brexit, Tube Travel, potentially imminent fatherhood, racism – all of which varied in quality, but was entertaining enough. I must admit the ‘vagina voodoo shit‘ of his finale-tale held a pre-eminent fascination.