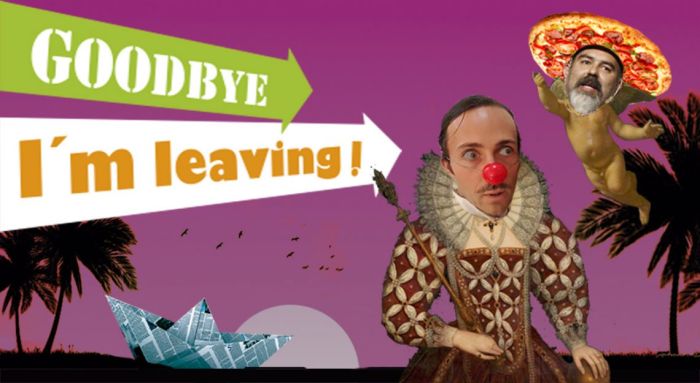 As I watched the two members of La Barca dei Soli perform their clown routines, I found my spirit soar along its past lives to medieval towns, to a provincial child staring wide-eyed with glee at a pair of touring Provençal street entertainers. La Barca have hit the seam, the tradition is with them, they are Jedis of the clowning art. Their Yoda is, unsurprisingly, Philippe Gaulier, & to see La Barca perform is to witness the genius of Monsieur Gaulier, whose fussy eye has helped in the development of the show.

Goodbye…I’m Leaving is the ultimate comedic skit on the Don Quixote/Sancho Panza archetypes, stuffed full of myriad ingredients which have infused themselves into the Clowning tradition. Our two performers are the wiry, classically exuberant Claudio Del Toro (Italy) and eye-brimming Armando Gonzalez (Mexico), the former a Basil Fawlty, the latter ‘Papa Guinea;’ a naughty, precocious, mischievous child in a grown man’s body.

Their show consists of an expositive exploration of the nuances & combinations surrounding a single piece of dialogue/performance; & as we follow this impressive education in clowning, the amusement levels go through the roof. Repetition can be hilarious, especially in the hands of such consummate mastery, when laughter feels like obedience, but absolutely delighted to be thus compelled. The show is on at an awkward hour – midnight – but  if you are anywhere near the Caves at that time, I beg you to see this show before it leaves Edinburgh. Trust me, La Barca could keep making up variations on their show until the candle burns down, & then keep doing it in the dark, & we’d still be laughing.