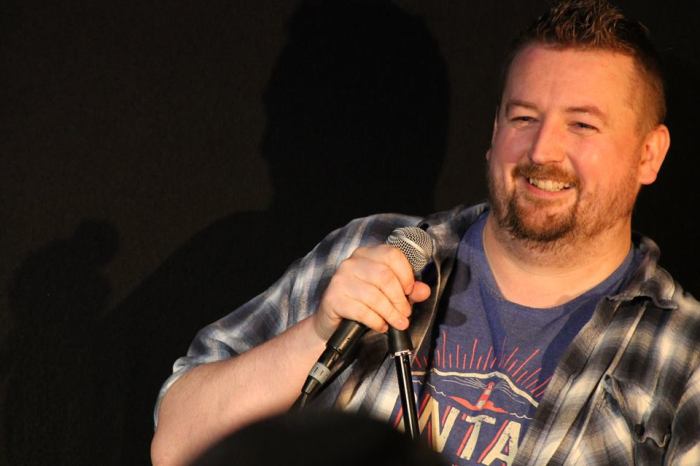 As you approach the Colosseum along the Via Labicana in Rome, one encounters a series of maps of the progression of the Roman Empire. The first one of these was just a dot on the map where Rome is, then the second shows its early expansion into the surrounding territories of Latina & Veii. This is exactly what is happening with Edinburgh’s Monkey Barrel Comedy, which has expanded from its tenancy at the Beehive on the Grassmarket, to opening its very own venue on Blair Street, right next to the City Cafe. Whereas The Stand is quite tricky to get to really, Monkey Barrel has placed itself like a knife at the jugular of a good night out, ready to slit our throats & let the laughter pour out until we lie helpless in fits on the floor. 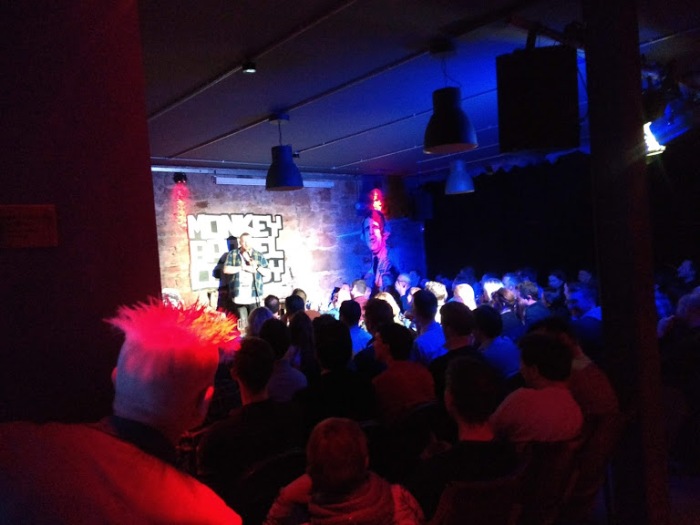 It was The Mumble’s sincere pleasure to be invited by chief monkey himself, Rick Molland, the guy whose been working this particular comedy seam in Edinburgh for a wee while now, having complete faith in his mining abilities, & has now struck gold! A minor-owner in Monkey Barrel, he would be MC-ing a well-balanced & eclectic thrill-ride for a yet another sold-out audience.

The Monkey Barrel’s main room  – & its rows of old cinema seats – is directly accessible from the street, which leads to an open-entry bar where a TV shows whats going on in the main room. As we were guests, we found ourselves sat on the cusp between the two, which gave as an intriguing insight into what comedians are doing before their sets – basically studying the room.

We witnessed giddy opener Gareth Waugh, the drollosaur philanthropy of weegie-snarling Vladamir MacTavish; the bounce-a-along comedy bombast of the liltingly Welsh ‘I put the Jew in Judo‘ Bennett Aaron, & the quirky edginess of New Zealander, Sully O’Sullivan. Before, after, & inbetween, Rick deliver’d a pitch-perfect masterclass in working a room. My lovely wife, who escorted me on the night out, declared Rick to be ‘fuckin’ brilliant.’ He is a proper conductor of electrical energy into the room, a machine of perpetual comedy motion! Imagine a chef barking orders in a busy kitchen & you get somewhere near the vibe that Rick creates – but of course it is all quite hilarious. Sometimes you don’t even know why you’re laughing, but you’re doing it anyway – now that’s comedy genius!

After Sully had finished his smashing, headlining set, we hooked up with Rick for the wee walk along the frolic-infested Cowgate to the Grassmarket, back towards the Monkey Barrel’s spiritual home at the Beehive. Rick had invited us to his latest contribution to Edinburgh’s love of comedy – a late-night shindig in the Beehive’s ‘Attic.’ I mean, during the Fringe there’s comedy on until daft o’clock every night, so there’s deffinitely a market for such a slot. It cannot be denied that people laugh harder & longer & louder the more pissed they get – & the difference between the slightly sober crowd who Rick opened his night to at eight, & the one who he was winding things up to at 00:30 was markedly different.

On our walk to the Beehive, I asked Rick a few questions about how things were progressing since our last chat, in May 2017.

Hows 2019 looking for the Scottish Comedy Festival at the Fringe?
Rick: The Scottish Comedy Festival Line-up for 2019 is looking stronger than ever, we’ve got SCF favourites like Raymond Mearns and Gary Little returning, along with some amazing new faces like the award winning Rahul Kohli and I’m particular looking forward Gav Webster bringing his cult podcast The Comedy Results to us this year. This year we’ve expanded our scope a little bit. We’ve added Nightcap as second venue, so we’re just finalising the last couple of spots, we plan to announce the full SCF line-up in next couple of weeks.

When did you decide to start late night comedy at the Beehive, & how’s it going
Rick: The Innis & Gunn Comedy Attic is the newest addition to the Scottish Comedy Circuit. We’re very much in our infancy, as we’re just four weeks old. The show is fucking crazy. Drunk acts and drunker audience members are a hell of a mix. Why do a late night gig? Basically, I fell in love with stand-up at late night Edinburgh Fringe gigs like Late & Live and Spank. These are the gigs that are the heart and soul of the festival. There’s never really been an attempt to see if something like that can exist outside of the fringe, it’s Punk Rock Comedy, a little bit edgier, anything goes but really fucking fun. We’re a month in and seems to be working, which is as much I could hope for. What Happens in the Attic, Stays in the Attic!

What is it about Edinburgh that makes it such a beacon for comedians & fans alike?
Rick: Edinburgh is amazing city, it’s relaxed, chilled and creative as hell. Comedy wise the fringe plays a big part in the reason it’s a beacon. But you can’t over look how strong the circuit is right now in Edinburgh, There’s the amazing Monkey Barrel Comedy, The Stand, Gilded Balloon and then there’s my crazy little gig in The Attic. It means that audiences can go an see a variety of top acts and have choices on the type of nights they want.

Rick was soon back on stage weaving his magic – it was a bit crazy actually; Sully opened, with Gareth Waugh in the middle, & guitar-wielding Harry Garrison to finish. The crowd was banterery and responsive & the whole near sold-out gig was really interactive. It was like the Monkey Barrel gig but turned up to 13. Really good fun. An audience with no limits, including quite a lot of banter with a nurse about the time she found a pen, a crisp packet and a dead bird in an old woman’s vagina! You had to be there, & I recommend that you do. Nice one Rick & keep up the good work! 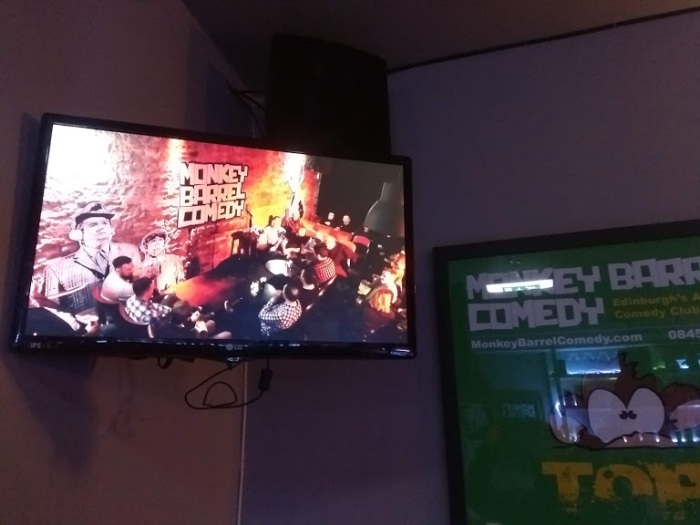