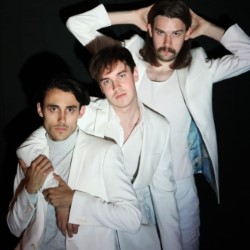 The heavens opened on my way to reviewing the comedy play Cry Babies: Danger Brigade. Fortunately, neither heavy thunder, lightning nor what I could have sworn was at least 2 inches of rain in 5 minutes could dampen my enthusiasm for this offbeat WW2 farce with the three actors (Michael Clarke, Ed Jones, James Gault) sharing multiple roles to keep the action rolling along at a furious pace.  We got an inkling of what we were in for right from the start, with a frantic barrage of introductions to the great list of characters who would be involved in the plot that was about unfold. They used a screen for this and the lights went on and off frequently, while lighting their faces with torches whenever they wanted to indicate something particularly horrible.

The plot involved the actors playing both German and British military personnel, all of them in full uniform. Which of course involved a good deal of changing in and out of costumes, during which they threw everything around with great abandon, ending with the three lads in nothing but their underpants. Which somehow perfectly fitted into the general mayhem of the production.  The acting was top level, with the performers relishing their roles and delivering their outrageous lines with great gusto, turning this drama into hilarious farce.

There was a villain who crept up to the stage from behind us in a long leather coat and spoke in an accent that would rival the greatest. There was a mop which emerged as a character in the hand of a humble cleaner dressed in a white vest. The mop was a dear friend to this cleaner who mopped the floors of Westminster in London and returned many times to converse with its owner. And then there was the Rat King, representing the evil Nazi regime, with rats at his feet as he created an army fit to destroy all that was living and replace it with his tyranny. Not to mention a Star Wars moment as sons and fathers were revealed.

It sounds like complete chaos, but in fact there was a plot, which moved fast and fluidly and was incredibly easy to follow, thanks to marvelously conceived writing and perfectly timed – if manic – performances by the cast. Their jokes arose out of the underlying seriousness of the situation. They. had a dangerous mission to perform. Would they be cry-babies or worthy members of the danger brigade they found themselves part of? In an impossible situation perhaps the only sensible thing to do was to turn to comedy and slapstick. This show was a multi layered mix of farce, wit and theatrical enterprise. While we laughed at the jokes we were left in no doubt about the absurdity of war. It’s clever and genuinely funny. Go and see it, you won’t be disappointed.