Rob Gee is back in Vancouver with a brand new show!

Hello Rob, its been a whole year since we chatted last – where have you been & what have you been up to?
One thing that’s made me hugely happy is being lead artist for a thing called the Comedy Asylum, which is basically comedy shows created and rpeformed by people on the receiving end of mental health treatment. I love it. As someone who worked as a nurse in psychiatry for 12 years, it’s like a breath of fresh air.

How do you find the process of reinventing yourself & your show each year?
I simply write the shows I want to see. If you have an idea that makes you giggle it’s certainly worth knocking up a first draft.

You’re bringing a new show to this year’s Vancouver Fringe, what are you bringing to the table?
It’s the story of an escaped psychiatric patient who befriends a lost six-year old. They go on some adventures together. She’s full of sugar and he think he’s an Egyptian pharaoh. 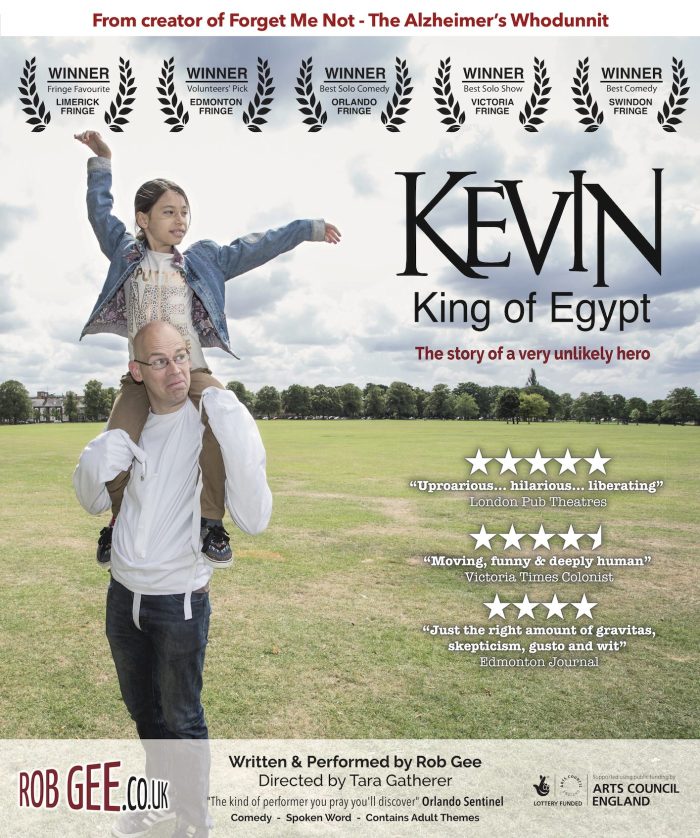 Is the show an extended highlights session of your 12 years as a psychiatrist nurse, or is there more to it?
It isn’t that. It’s a story with invented characters and it’s made up. I certainly couldn’t have written it without my particularl background, but that’s true of everything all of us write. When I first wrote this show I performed it to an audience of ex-patients, plus the good people of the Comedy Asylum. It wouldn’t have seen the light of day without them.

What have been the biggest obstacles you overcame while putting your show together?
Procrastination. Actually this one was really easy. It was huge fun to write, and the process of bouncing it around with different people involved a lot of giggling.

What thoughts & emotions do you hope the audience will take away from the show?
Happiness; a life-affirming happiness! I wouldn’t settle for anything less.

Has your attitude towards the Fringes changed at all in recent years?
Not really. I’ve always felt very much at home within the whole fringe movement. Maybe I’m more of a purist than I used to be: I tend to think fringes that follow the Edinburgh/Adelaide model are closer to trade fairs than fringe festivals.

What is your last minute routine before you go on stage to perform?
I don’t really have one. I use the washroom and look at my phone. Sometimes I have a little dance, if the pre-show’s loud enough.

What does your perfect day off at the Vancouver Fringe look like?
It’s not raining! And Jem Rolls has bought me a pint.

You have twenty seconds to sell the show to someone you are flyering in the streets of Vancouver – what would you say?
Kevin is an escaped psychiatric patient. Millie is exuberant six-year old. Granny doesn’t stand a chance.