If you’re after a guaranteed crowd-pleaser, something to satisfy all appetites and have your friends and family walking out of a show with you smiling and saying, ‘I’m glad you chose that,’ get yourself along to Jon Long at The Underbelly. After my annual 2 week Fringe staycation, I was back at work and feeling knackered already. A 6am start did not help me in mustering up motivation to get myself back out and in the thick of it. So to call it fortuitous that I was off to review Jon Long, would be a serious understatement.

Long strolls onto the stage as relaxed as you like. He instantly starts bantering with the crowd, full of understated bonhomie and big-grinned charm. He is clearly a young man who does this a lot. As if proof were needed, he begins by sharing his tales of woe at the part-time job he has taken to fit around his gigging, at a waste disposal plant. This allows him to give himself the moniker of ‘Stig’ (of The Dump, not Top Gear), and this self-prescribed nickname fits precisely because of his broad appeal. 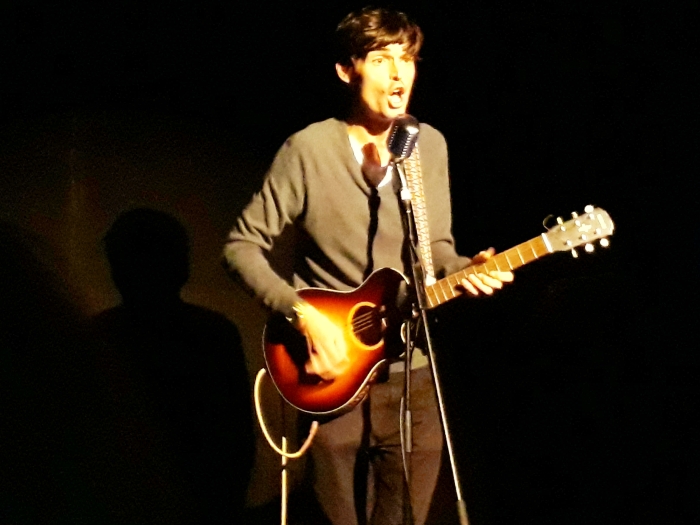 The demographics in the room are clearly displayed as the hour flies by. Each nugget of his set provokes a different level of laughter from every section of the room. Older folk laugh at the ‘Millennial gags’, the London crowd laugh at his sing-song tales of commuter hell, and I am in hysterics at his confessions of insecurity when attending his first Scottish Alcoholics Anonymous meeting. This is material that is sharp, well observed, and invites everyone to be part of the fun. A number of shows that I’ve been to in the last few weeks have suffered from too many niche, or geographically specific references. Our Jon is too seasoned to make that mistake. The songs he performs are both singalong catchy, and funny. I’ll confess to being usually deeply antipathetic to musical comedy. Tonight though, by the end of our troubadours toe-tapping numbers, I was singing along happily to each catchy chorus, as was everyone else in the audience.

And the crowd were with him from the word go, I took joy in observing the whole room continuing to clap after the lights went up at the end of the show. You see all comedy at The Fringe doesn’t need to be challenging, or controversial, or telling a deeply sad story. Long spends a pleasantly humilitous 2 minutes explaining why he didn’t fall into the pity trap of writing a heart-wrenching piece about his own addiction issues. Sometimes all you really want on a night ot is laughter, camaraderie, and a warm buzz in your chest when you leave the venue. This is why, when he finally gets into his ‘Save the Planet’ section, the audience is receptive, and it’s an approach that more activists should take. He gently pokes at the hypocrisy of armchair activists, and holds his hands up to his own ecological foibles. Just like Kermit, he gets that it’s not easy being green.

I had one critical thought throughout, and that is the speed of his delivery. When telling stories, speaking as ‘a character’, or singing, Long’s delivery is perfect. However there were sections where he was delivering to the audience as himself that felt churned out at far too high a words-per-minute count. A 4-minute section on The Maldives was almost completely lost to me as he rapidly fired out the words in a monotone, but nonetheless charming fashion. The overall quality of his material, and good will he bought from his audience from the off, compensated for this to a great degree.

As I left and started scribbling in my notebook I noticed that I was striding down the road with a spring in my step and a song on my lips, all thoughts of my early start at work again tomorrow deliciously absent as I bounced home. I was genuinely grateful to have spent my evening with Jon, I only wish that I’d brought some of my own friends and family along with me. I know that I would have had the pleasure of seeing a similarly nonchalant spring in their steps too.