With their ‘Le Bureau de Strange,’
The Establishment are blowing away the Fringe

Hello Dan, first things first, where are you both from & where are you both at now, geographically speaking?
Dan: I was born and grew up mainly in London. Right now, at the time of writing this, I am in Margate doing a show at Dreamland, a vintage theme park, and we’ve been given free reign on the rides, perks of the job! Wish the nine-year-old me could be here to see it! Neil is a country boy from somewhere in Sussex, but we both live in London.

Hello Neil, how did you get into comedy?
Neil: I discovered comedy to survive the school bullies. If I clowned around and acted like the lowest level fool then I seemed to avoid getting a pummelling in the playground. However this eventually backfired as the bullies would deliberately pick on me so that I would make them laugh. I first performed comedy on stage whilst attending a school just for boys, the only time we ever mixed with the opposite sex was once a year when we joined forces with an all-girls school to put on a show at the local theatre, so I basically got into performing comedy to meet girls. Later on, I went to a Drama School to study to be a ‘proper’ actor, as I was told I would make a great Hamlet. When I attempted one of the famous Shakespearean scenes, I couldn’t find a prop dagger I needed, so I improvised by using a plastic spoon instead, which was the closest thing I could find from the school canteen. When I pulled out the plastic spoon during a very dramatic scene everyone just laughed, so I basically got into performing comedy professionally, because I was a shit actor.

When did you first realise you were funny?
Dan: I think I’ve always used humour to diffuse situations, avoid discomfort and ease tension, but most importantly just to have a good laugh. I was a bit of a piss-taker and liked messing around at school-taunting teachers and being a general pain in the arse. But I’m not sure I thought of myself as funny, I always hung out with kids I thought were much funnier than me.

What advice do you have for a comedy act making their debut at this year’s Fringe?
Neil: Try not to take it too seriously, it’s meant to be funny, so if you can’t find fun in what you’re doing then neither will the audience, although saying that, it can be a challenge to find pleasure when all you have in the audience are two pensioners and a critic, based on personal experience. Also try not to drink too much, it’s very tempting to go wild every night as there are so many exciting people and things around, but performing hungover is rarely fun, again based on personal experience.

Can you tell us about your training?
Dan: I went to an after-school acting club called Anna Schers in London, but I was always lacking in confidence. It was terrifying to get up and perform. So I didn’t for about fifteen years. Then I was writing and directing a friends comedy act and he said he thought I was quite funny and we should get up and do something together. His name was Guy Combes and collectively we were called Moonfish Rhumba and we made it to the finals of Hackney Empire and Amused Moose Competitions. So, thank you Guy for giving me a push! During this period I got a taste for performing comedy and started doing stand-up. Whilst on the circuit I met people who had done clown and theatre training in Paris with a supposedly scary genius of a man called Philippe Gaulier. It was very enlightening to find that comedic acting and clowning was a skill that could be developed. I spent some time in Paris with Philippe and sought out many other great teachers to find out as much as I could about this art form. Phillipe teaches the importance of having pleasure in performance… if you are not enjoying yourself how can you expect the audience to? This is a simple concept, but it can be difficult to achieve when night doing the same show 26 nights in a row. In ‘The Establishment: Le Bureau De Strange’ we try to keep it as fresh and unpredictable for ourselves, so that we have as much fun as possible.

You’ve got three famous comedy double-acts (dead or alive) coming round for dinner. Who would they be & what would you cook; starters, mains & dessert?
Neil: Well firstly I’d be a little annoyed that I’ve got to cook for six guests rather than just three, so I think some kind of soup to start, a stew for mains and rice pudding to finish, all of which can be put into three big bowls and just slopped out onto the plates. I guess it would be rude not to invite Morcambe and Wise, as they were always on the TV when I was growing up, so defined what a good comedy double act is for me. I’d like to invite Little and Large, as I’d be interested to know what they’ve been up to since the eighties, but mainly because I think they would be fine with me making jokes on how one is too fat and the other is a little short, which is generally considered a conversation faux pas at a dinner party. Finally, I’d invite the Moustache Brothers, who are a Burmese double act that I once met whilst travelling. One of them was imprisoned after pulling the short straw to tell a political joke criticising the government. After eventually being released from six years of hard labour they continued their double act, despite being told not to. I feel this kind of commitment to comedy deserves a free three course meal.

What does your perfect Sunday afternoon look like?
Dan: In my fantasy life I would be having a Sunday roast with my friends who are all the world’s most important artists, intellectuals and world leaders. But in reality I’m most happy doing virtually nothing, just chilling, maybe reading a book or watching Netflix.

You two are pretty hilarious together on-stage… are you the same off it?
Neil: Well thank you, that’s very kind. I think so, we try not to take life too seriously on stage or off it… we look to find humour in many things. We generally clown around a lot, except for when we’re being interviewed, which we take very seriously and without humour, like now for example. It seems much easier to be funny off stage when you’re in a double act. If you’re a solo act,you’renormally just sat in the corner on your own waiting to go on, wondering if anybody finds you funny or indeed even likes you. With a double act you’ve at least got the other person to find you funny and watch your back. 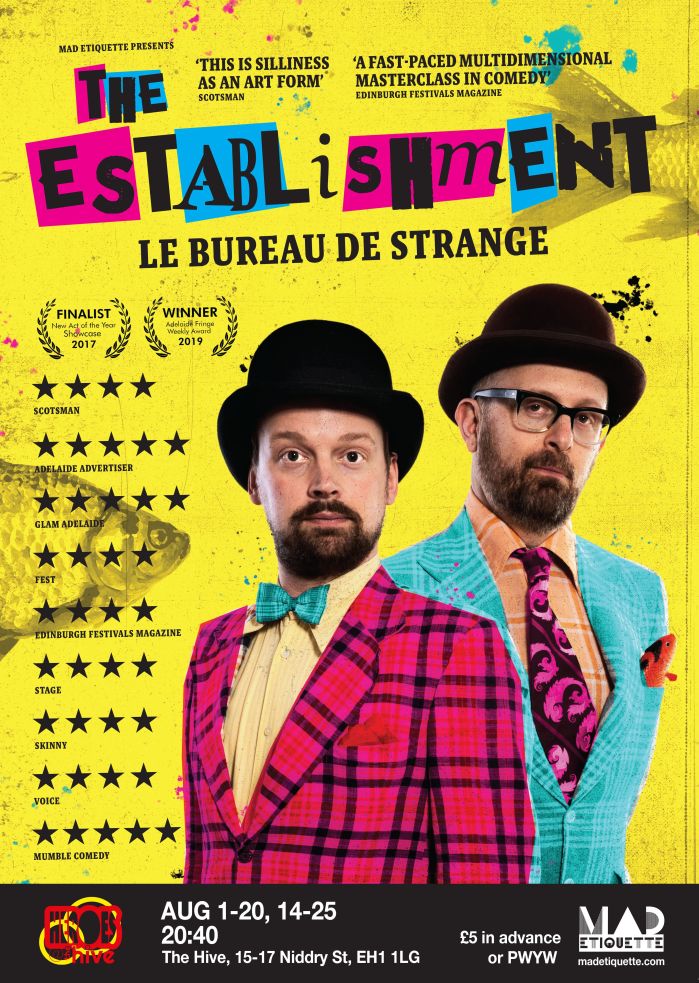 You’re bringing a show to this year’s Edinburgh Fringe; can you tell us about it?
Neil: This is our third show as The Establishment at the Ed Fringe, which so far this year has had sold out performances at the Leicester Comedy Festival, Brighton Fringe, Melbourne International Comedy Festival and the Adelaide Fringe, where it won the Weekly Award for Best Comedy. The Establishment are Godfrey and Cecil, two charming ultra-privileged chaps who take the audience on an anarchic rollercoaster of physical comedy and quick-fired wit. The show is very British and very stupid.

Where, when & why were The Establishment formed?
Dan: Me and Neil did a show together called Pekka and Strangebone in Edinburgh in 2013 and, during this time we came up with the idea for the act. The idea was basically just two gents in bowlers saying ‘I know where I’m going’. Pretty basic, but that’s how we work, we have a small idea then we try it out to see if it has legs. Eventually we gota chance to do it and we haven’t looked back since.

What are the creative processes behind writing material for the Establishment?
Neil: This is Top Secret, so I can’t really tell you. It’s a bit like asking Colonel Sanders for his delicious eleven herb and spice recipe, which in a way is a similar process to how we make a show. We throw a load of jokes and visual gags in at a rehearsal, then deep fry it in front of an audience, changing things as we go, until everything is crisp and lovely. I’m not quite sure why I’ve decided to compare our creative process to making KFC, I think maybe I’m just hungry right now. 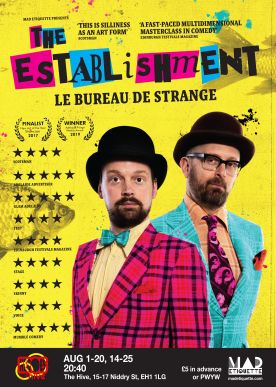