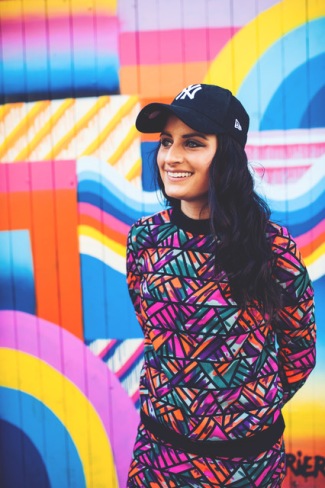 Hi Jen, so where ya from & where ya at, geographically speaking?
I’m from a place called Sunbury-On-Thames which borders South West London and Surrey (I like to say under the Heathrow flightpath!) but I now live in Camden.

When did you first realise you were, well, funny?
I played the role of Eliza Doolittle in my college production of My Fair Lady, and I got some good feedback about the way I’d used humour to perform one of the songs. Then when I was a teacher I used to do impressions of the funny, sweet and silly things that children, parents and others would say and I think I just enjoyed making people laugh.

Who are your comedy idols?
Chris Lilley, creator of ‘Summer Heights High’, ‘Angry Boys’ and ‘We Can be Heroes’ is a comedy genius. I admire how he uses the characters narratives to highlight the blind spots of society, and his character creations are some of my favourites to exist – especially Mr G! Harry Enfield is high on the list for his hilarious and timely sketches. Luisa Omielan for what she has contributed to comedy with her recent shows that are hugely funny, relatable and empowering, and finally Pajama Men who blow my socks off with their characters and sketches. I could watch them do the same thing over and over again and I would always nearly wet myself.

Upon which life-experiences do you draw your own comedy?
For my most recent show, personal experiences that have happened as a timeline from age six onwards. It would often come from what others would ask or say to me, and me not being able to give a simple answer about where I’m from. I became more aware of the idea of ‘labeling’ since trying to forge ahead in a performance career because of the needs of a casting criteria. The feeling of being an ‘inbetweener’ was a strange one and so I drew out all the reasons why it was strange and tried to piece it together in a comedic puzzle.

What does Jen Wakefield like to do when she’s not being funny?
Jen Wakefield likes to watch things that are funny. Annoyingly now that my hobbies have become my career choice, I need to find new hobbies! I watch lots of stand -up, Improv and Soho Theatre shows. I also write occasionally about dance and theatre productions. I enjoy keeping up with music and have been presenting my own radio show on Watford’s Vibe107.6fm. Radio is something I’m also pursuing along with polishing my comedy training wheels with The Free Association who I am training in improvisation with. I’m currently learning how to execute a ‘Harold’ which is like learning a whole new sport in itself!

Last year you performed in various places through the Fringe, did you feel overloaded or take it in your stride.
I think I took it in my stride. Compared to other people’s Fringe commitments it wasn’t too bad. Along with our own show, doing an extras role in a Pleasance Show (My sketch partner and I had small roles in the BEASTS Mr Edinburgh show at The Pleasance Dome each night) was great for meeting other comics and was socially very rewarding. So I mostly saw it as a lucky bonus.

You are bringing us your debut one-woman character show ‘Girl In Da Corner,’ to the Fringe. Can you tell us about it?
Yes I can! It is a character comedy show about identity and explores the mixed-race experience that I’ve had. I wrote an article titled Sorry, you’re label has expired about growing up identifying as Anglo-Indian and found it was met with a greater response than expected. Lots of people contacted me to share their similar experiences, so I thought it might be a topical piece to explore in a show, and I hope there might be other people who can identify with the content or it may spark a conversation. There are lots of different areas covered, but the identity crisis is laid bare through my main character called ‘Natasha G-Storm Flex’ who is delivering her ‘Grime Outreach programme-taking Grime to hard to reach areas’. So there will be three original Grime/Rap songs which I’ve written, and there are various other sketches and characters which will make for a high energy and fun 50 minutes.

Can you sum up your show in a single sentence?
A show that unearths the mixed-race experience through characters, comedy and music!

As a cross-cultural child, will we be seeing touches of both Indian & British humor in your set?
Yes definitely. Two characters which are becoming a bigger feature of the show come from Delhi and Mumbai, and explore the feelings they have towards each other and their own charms and prejudices. There’s also a song called ‘Biscuits and Bars’ about Natasha G-Storm Flex’s time spent with the Cheltenham Women’s Institute. It doesn’t get more British than that!

You are also a blogger of some aptitude, does this way of writing penetrate your material?
I think if you try to exercise your writing muscle it can be beneficial for helping to take the anxiety out of ‘getting started’. Comedy and blog writing are very different in style but I suppose it has helped me to develop my own voice and opinions which appear in the show.

What does the rest of 2017 hold in store for Jen Wakefield?
At the moment there is razor sharp focus on the Fringe. Most of my energy is going into the show, currently and thinking about the shows life after Edinburgh, but I do have gigs planned for after Edinburgh. I’m also still pursuing radio on a different level so I shall keep plugging away at that, along with the training and involvement with The Free Association. More writing, more performing, more flexing!

Jen Wakefield will be winging in to the Edinburgh this Fringe

One thought on “An Interview with Jen Wakefield”