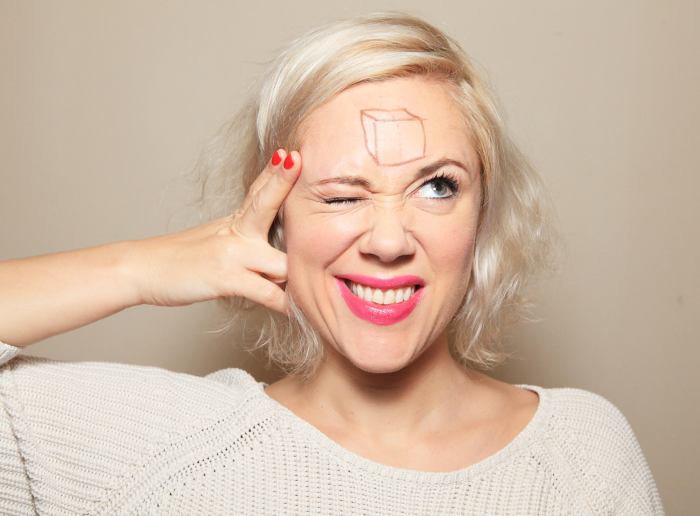 Claire Ford has just swapped her kagool for a cardboard box. The Mumble wanted to find out why…

Hello Claire, so where ya from & where ya at, geographically speaking?
Claire: Hello Mumble, I was born in Cambridge and grew up round Cambridgeshire and Northants. Nowadays I’m a bit of a nomad, living from festival to festival and occasionally stopping in London. It’s said that people settle back where they’re going to die so I try to avoid East Anglia.

When did you first realise you could make people laugh?
Claire: Humour was a big part of our household growing up. Schools, weddings and funerals all technically had audiences, so therefore they were considered fair game. ‘And who has the ring?’ ‘I do, but I’ve hidden it well. I’ll need a rubber glove to get it out.’ (My Brother at my Dad’s wedding just before he was asked to leave by the registrar)

Which comedians inspire you, both old skool and on the scene today?
Claire: Growing up I loved Ade Edmonson, Rik Mayall and French & Saunders, but my favourite was Blackadder with his mixture of dry wit and buffoonery. Today I have loads of comedy crushes. I enjoy a performer who takes risks and who’s a bit on the edge. I love Dr Brown, Hannah Gadsby, Jayde Adams, and Trygve Warkenshaw and Josh Glanc for pure hilarious physicality, loads loads loads, but I have to say for inspiring in terms of what she’s done with her career, I love Kristen Wiig and how she’s written and performed consistently funny material live and on screen. and she’s way rich.

You’ve got three famous figures from history coming round for dinner. Who would they be & what would you cook; starter, mains & dessert?
Claire: I’d have all famous people from my home hood East Anglia. Stephen Fry so we can all fall in love with his voice and brilliant knowledge, Boudicca, Queen of the Iceni people, so we can tell her how she did good by us East Anglians and then Marilyn Monroe for the glamour. I’d cook indulgent food like scallops to start, Thai green curry for main and Cheesecake for dessert. I’d say ‘Marilyn, you’re not in Hollywood now girl, eat up your fill.’ and I’d say to Stephen ‘I’m sorry about the combination, pick around what you don’t want’ and I’d say to Boudicca ‘Thai green curry is from Thailand and Thailand is a country in East Asia and East Asia is.. never mind, eat your cheesecake, you’ll need the energy for all that murder later.’

You are bringing a show called UNBOXED this year’s Fringe, can you tell us about it?
Claire: When I was 5 my Dad took me to his huge warehouse in the Fens in East Anglia. It was full to the ceiling with cardboard boxes and he said to me ‘one day all of those will be yours’. So I grew up happily thinking that was going to be my life. Unboxed is the story of what happened when, despite my Dad’s protestations, I changed my mind.

You were part of multi-award winning comedy duo, The Kagools, so why the solo move?
Claire: We’ve always both done solo work, but it tends to go under the radar because we’re so busy with The Kagools. I started off doing characters before we got together as a double act. When we found The Kagools we loved them so much we’ve never looked back. And now we’re looking back.

What advice do you have for somebody performing comedy at the Fringe for the very first time?
Claire: See loads of shows, have as much fun as possible, go to 10 to 10 in Delhi for a rest. Tears in the 3rd week are normal. Don’t put pressure on yourself to be ‘successful’. Just making it this far is more than so many other people manage and getting here is both a privilege and a success in one. What you get out of this month will most likely be unquantifiable, so just go with the flow and be nice to your tech and the door staff, they’re most likely working way longer hours than you and they will definitely tell other people if you’re a twat.

You’ve got 20 seconds to sell the show to somebody in the street, what would you say?
Claire: Oh hi, do you like cardboard boxes? Great me too. I have just the show for you actually. It’s all about corrugated cartons and yes, the set is entirely made out of the brown stuff. Oh you’re free at 2pm? Well come along then, I even have a double walled 0203 I can show you. Just Out the Box room in the Caves. I know, what are the chances.

What will Claire Ford be doing after the Fringe?
Claire: The Kagools are going straight to Korea for a festival and then we’re working on a pilot and finding somewhere to live for a little while, probably in East Anglia.

Just the Tonic @ The Caves